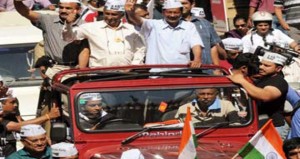 VARANASI: Arvind Kejriwal, chief of the Aam Aadmi Party, arrived by train in Varanasi this morning and will, at a rally, ask the people whether he should take on Narendra Modi, the BJP’s prime ministerial candidate there.Ahead of his rally, he took a dip in river Ganga at the Bhainsasur Ghat in the city and told reporters, “Fighting against Modi is a small thing. Saving the country from corruption is a big issue now. I prayed to God to give me the strength to fight and save the country.”
Later, he visited the Kashi Vishvanath temple, where some protesters raised slogans against him and asked him to leave the city. An egg was also reportedly thrown at his car.
On his way to the temple town in Uttar Pradesh, Mr Kejriwal told NDTV, “It’s not just about challenging (Narendra) Modi. There are two main political parties that lead the NDA and UPA. One is ruled by Modi and the other by Rahul (Gandhi). People in this country don’t vote for a person, they become angry and vote against a person. Sometimes they make the NDA lose, sometimes they make the UPA lose. I am saying this time let us defeat both parties.”
The BJP’s decision to have Mr Modi run for the Lok Sabha from Varanasi is designed to enthuse voters in India’s largest state to support the party. Mr Modi, who has never contested a national election, will also be contesting from a second seat – Vadodara in his home state Gujarat.
Soon after the BJP announced Mr Modi’s candidacy from Varanasi, Mr Kejriwal 45, had said at a rally, “I am going to Varanasi. We will ask people there whether I should contest against Modi. If they say yes, then I am ready to contest.”
Like Mr Modi, Mr Kejriwal has never contested a national election. But while Mr Modi is a veteran of many state elections, Mr Kejriwal contested his first in December last year, earning the sobriquet of giant-killer by defeating Delhi’s chief minister Sheila Dikshit by a massive margin.Earlier this month, Mr Kejriwal had conducted a controversial tour of Gujarat; he said he wanted to audit the development that the BJP routinely invokes to illustrate Mr Modi’s competence in his four terms as chief minister.
Unsurprisingly, Mr Kejriwal said the claims didn’t check out and that the super-state that Mr Modi claims to have created exists only for the wealthy and industrialists.
The Congress has not named its Varanasi candidate yet but has promised to give Mr Modi a tough fight.