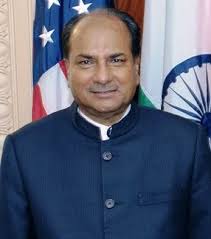 KASARGOD: Discounting the chances of the BJP forming the government at the Centre, senior Congress leader and Defence Minister A K Antony on Sunday asked the Left led by CPI-M to prove their commitment to secularism and national unity by supporting the Congress after the elections.
“If the CPI-M is sincere in their pronounced aim to keep the communal forces at bay, they will have to co-operate with a front under Congress leadership. If they are ready to co-operate, we will accept it,” he said. Claiming that it would be impossible for BJP to form a government at the Centre, he said the Congress-led UPA would try to form a secular government after the elections.To keep the communal forces at bay from coming to power at the Centre, the Congress would accept cooperation from all secular parties, he said.
Antony said the political climate in Kerala was favourable to the Congress-led United Democratic Front. Hitting the campaign trail in Kasargod in north Kerala, where Congress nominee T Sidduque is locked in a fierce combat with the CPI-M’s sitting MP P Karunakaran, Antony addressed a string of meetings in the area, including the Left pockets of Payyannoor and Kanhangad. The Minister had yesterday also made it clear the party was ready to accept support of others to form another edition of the UPA government at the Centre after the polls to avoid “the danger” of BJP under Narendra Modi coming to power.
He had dismissed projections that BJP was a frontrunner to form the government as hype, saying he saw a clear possibility of UPA forming another government for which other parties would extend support which Congress would take.The impression being created of a “Modi wave” across the country was a myth created as part of BJP’s marketing strategy with the support of a section of corporates, he had said.