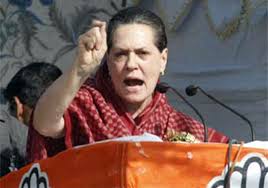 NEW DELHI : A gigantic Congress meet in Delhi today tried to shake off the atmosphere of an anti-climax as senior party leaders including the Prime Minister and Sonia and Rahul Gandhi took the stage for an all-day strategy meet on the national election that’s due by May.
Last night, Mrs Gandhi decided that her son will lead the election campaign without being named the prime ministerial candidate, a move that has demoralised party workers. Amid repeated cheers of Rahul-for-PM tossed into the air,  Mrs Gandhi announced, “The decision on Rahul taken last night is final.”
Later, after another round of high-decibel clamour for him, Mr Gandhi took the mic out-of-turn. “I will speak from my heart, say what you want to hear later today,” he told the audience of thousands, allowing speculation over whether some sort of surprise announcement will follow.
Party workers feel that declaring Mr Gandhi as its candidate could help adrenalise the Congress campaign at a time when it appears emaciated by stubborn inflation and immersive corruption.  But senior party leaders hold that declaring Mr Gandhi the presumptive prime minister will encourage the opposition’s choice Narendra Modi to amp up his aggressive and direct campaign.
After more than a decade in power, the Congress is lagging well behind the BJP in opinion polls. In recent elections in key states like Delhi, Mr Gandhi was the star campaigner for the Congress but failed to deliver and the party lost considerable ground to both the BJP and Arvind Kejriwal’s new Aam Aadmi Party.
Critics of Mr Gandhi point out that by repeatedly refusing to accept a government position, he has demonstrated a lack of political appetite, and that recent elections prove that a depleted Congress must rely on his famous last name rather than his instincts or ability.We meet
today to send the clear signal that Congress is ready and prepared for the battle ahead,” Mrs Gandhi said to the Congress gathering in Delhi today at a time when her party is need of a serious gear-shift.