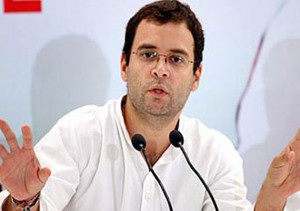 NEW DELHI: The All India Congress Committee is scheduled to meet on Friday to devise strategy for the much-talked ‘Kisan Rally’ on April 19 to put pressure on the Narendra Modi government, which has recently re-promulgated the Land Acquisition Ordinance.
Congress vice president Rahul Gandhi, who returned to India yesterday after nearly two-month long sabbatical, is also expected to attend today’s AICC meeting.
If the AICC sources are to be believed, Rahul Gandhi will also hold a candid discussion with a section of senior Congress leaders who have reservations about his leadership. The Congress vice president is also likely to meet a delegation of farmers’ leaders from across the country on the land ordinance issue.
Senior Congress leader Anand Sharma had confirmed that a ‘rejuvenated’ Rahul Gandhi will lead the anti-land bill protest on April 19.
Interestingly, Rahul had spearheaded an agitation in 2011 from Bhatta Parsaul in Uttar Pradesh against forcible land acquisition of farmers that had culminated into enactment of Land Acquisition, Rehabilitation and Resettlement Act, 2013.
Seeking to corned the Narendra Modi dispensation, Congress is planning a massive mobilisation of farmers across the country to ensure success of the April 19 Kisan Rally.
The rally also assumes significance as it is being held on the eve of the opening of the second phase of the Budget session of Parliament and at a time when the government has re-promulgated the Land Acquisition Ordinance.
Rahul’s return has boosted Congress’ planned mega farmers’ rally in the national capital against the land ordinance which has been rejected by the Opposition as ”anti-farmer and anti-poor.”
The rally is being seen as a sort of a comeback vehicle of Rahul and a show of strength by the party, which has been strongly opposing changes in the original Act. Congress is pulling out all the stops to make the rally a success, with the party launching an aggressive media campaign, besides booking a special train.
Congress is hoping to rally people from various parts of the country with the ‘Chalo Dilli Chale’ slogan which will be seen on hoardings and heard on FM radio channels, where it has booked spots.
The 17-coach ‘Kisan Express’ train carrying farmers will leave from Jaipur and arrive at Delhi after six stops on the rally day. Women too will join the rally.
As per reports, Rahul will be the only leader from the party to share space with Congress President Sonia Gandhi in hoardings for the Kisan-Khet Mazdoor rally, which will carry pictures from Rahul’s 2011 Bhatta Parsaul agitation as well Sonia’s recent visits farmers affected by unseasonal rains and hailstorm in various states.
Rahul has faced severe criticism ever since the Congress party was routed in the 2014 Lok Sabha elections in which his party managed to win just 44 seats in the 545-member House. His sudden absence from the political scene gave his rivals another chance to question his leadership qualities and interest in politics.