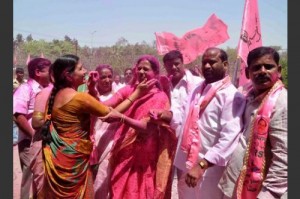 HYDERABAD :Last week, several posters of Telangana Rashtra Samithi (TRS) leader K Chandrasekhar Rao sprung up all over Hyderabad, wishing him a happy birthday. The day after his birthday, the Lok Sabha passed the historic Telangana Bill. The timing of a beaming KCR appearing all over Hyderabad was meant to remind people that here is the man who made Telangana possible. It was political posturing to demand the credit for the formation of the new state.
It’s now party time in Telangana, not just to celebrate the formation of India’s 29th state but also because every party – the TRS, the Congress and the BJP – is vying to position itself as the one that deserves the crown of credit and the votes of the people for giving a new state.
“Thank you Sonia ji, thank you Sushma ji, thank you KCR,” says a young man, who says he lives in New York. His family is from Warangal, he has been living for the last six years in the US but felt this was an important occasion to come home.
Locals say the people of Telangana are celebrating and indebted to KCR, Congress President Sonia Gandhi, and BJP’s Sushma Swaraj for having made it possible.”KCR and his cadre worked hard over the last 13 years. People recognise that and will decide who to give credit and leadership,” says KCR’s daughter Kavita.
But the Congress can’t let KCR walk away with all the credit. That is why perhaps they are celebrating Mrs Gandhi as the goddess and mother who gave Telangana. Statues of Mrs Gandhi, in the avatar of Telangana talli (mother) are being taken on tour all over Telangana.
“Sonia is living goddess. She has sacrificed her vote bank in Andhra Pradesh for giving Telangana to us,” says a young Congressman in Medak.The Congress would like the TRS to merge with the party, so that electoral gains can be consolidated. Sources indicate the TRS prefers a pre-poll alliance, rather than a merger, to keep its options open post elections. Local BJP sources told NDTV that they are keen to woo the TRS but that seems unlikely, at least before the elections.
But the BJP is not going to stand by and watch the TRS and Congress walk away with all the credit. “Every single person in Telangana knows that without the BJP, Telangana Bill would not have been passed,” says a leader, who says they will go around and tell people that with Narendra Modi in the PM’s chair, Telangana will benefit just like the rest of the country.