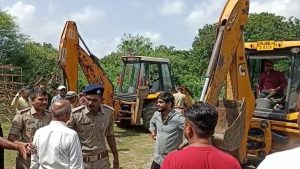 VADODRA:  A couple of bulldozers entered a private property in Gujarat’s Vadodara rented by Arvind Kejriwal’s Aam Aadmi Party (AAP) for an event last week. Sources said that the property had previously been allotted to Congress and the BJP, however, the action was implemented after AAP national convenor’s town hall meeting on September 20.

On Saturday, civic body officials reached the plot to demolish a portion of the alleged illegal wall. Aam Aadmi Party officials reached the spot and opposed the action. In visuals accessed by India Today, AAP workers were seen protesting against the bulldozer action and said they conducted the event after following due procedures. The AAP staffers sat on the ground and prevented the bulldozers from approaching the structure of the complex.

Ahead of Kejriwal’s event in BJP-ruled Gujarat, the Delhi chief minister had alleged that the saffron party was obstructing their agenda in the state. Kejriwal said that the BJP had been threatening locals and businessmen against renting their properties for AAP’s events. AAP reportedly faced 13 rejections before this banquet hall was granted for Kejriwal’s event.
Arvind Kejriwal, after establishing an AAP-led government in Punjab, seemingly has his eyes glued on poll-bound Gujarat. His agenda to secure seats in the state included a slew of poll vows and commitments that he tabled to the public. He announced assurances to unemployed youth in the state, allowances for women and free and quality healthcare education.
(Bureau Report with Media Inputs).