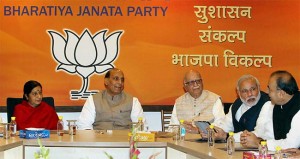 NEW DELHI :It is a day of decisions for the BJP, which is holding a series of meetings to finalise candidates and alliances for next month’s national election.The party’s parliamentary board met this morning to take stock of its alliances and mergers, amid strong objections raised by leaders like Sushma Swaraj and Venkaiah Naidu to tie-ups with “dodgy leaders.”
The party decided to take back a controversial Karnataka politician, BS Sriramulu, who had quit the BJP in 2011 and formed the BRS Congress. Sushma Swaraj had strongly opposed any alliance or merger with Sriramulu’s party, which would mean an association with his mentors, the Reddy brothers, who are in jail over illegal mining allegations.
The BJP’s central election committee, a bigger group, will now get down to a series of meetings to decide on candidates for over 300 Lok Sabha seats, including some in politically crucial Uttar Pradesh, which elects 80 Lok Sabha MPs.
But a decision on its prime ministerial candidate Narendra Modi, is not expected today. The BJP is said to be considering Varanasi in Uttar Pradesh for Mr Modi. Sources said he might also choose to contest from either Ahmedabad East or Vadodara in Gujarat, his home state.
The Varanasi seat in Uttar Pradesh is controversial – fielding Mr Modi from there will mean uprooting sitting MP and senior leader Murli Manohar Joshi who has made it amply clear that he is not happy to shift. Mr Modi’s close aide Amit Shah, who is managing his campaign in UP, held meetings with state BJP and RSS leaders last night.
Today, the party may confine itself to “no-controversy” states like Bihar, Jharkhand, Chhattisgarh, Assam, Karnataka and Madhya Pradesh, which means, the seats for leaders like Sushma Swaraj and BS Yeddyurappa are likely to be announced in the evening.
Ms Swaraj is expected to be fielded from Vidisha in Madhya Pradesh, while Mr Yeddyurappa may contest from Shimoga, Karnataka.