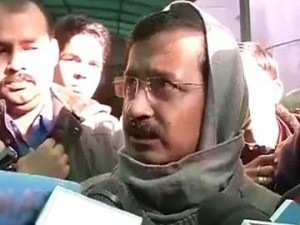 New Delhi : Arvind Kejriwal has said he will make 700 litres of free water available to every Delhi household within 24 hours of being sworn in as Chief Minister on Saturday, December 28. Making it free is not the problem, he said today, it is supplying the water to every house.
Early on Thursday morning, the chief-minster-to-be discussed the nitty gritty of water distribution in Delhi. “Making it free will happen immediately, perhaps within 24 hours. But water does not reach many areas…every area has its own peculiar water woe. We’ll have to see where we can source water for each colony and how much time it will take.””All plans are done…we will put forth our plan day after. It’s the responsibility of the government in power to ensure that they provide water for people to survive,” he added.
His water mission is expected to cost the government about 340 crores a year, some reports say. Mr Kejriwal will be sworn in at Delhi’s sprawling Ramlila grounds on Saturday; six other members of his Aam Aadmi Party will also take oath as ministers. He then has seven days in which he has to prove his majority on the floor of the Delhi Assembly.  (Kejriwal and his AAP ministers to be sworn in on Saturday)
Crucial to that exercise will be the external backing of eight legislators of the Congress, which clearly has misgivings about the unlikely partnership and has repeatedly emphasised that it will not offer “blind support.” AAP has 28 legislators in the 70-member house and needs to show the support of 36. (Meet Team Kejriwal)
Congressman and union minister Jairam Ramesh said last evening, “we cannot give support blindly closing our eyes,” adding that there “must be a common minimum programme” on the basis of which the alliance would work.

He also admitted that there are those in the Congress who are not comfortable with the arrangement. “Few leaders want us to continue support, few do not want to…senior leaders will finally take a decision,” he said.Reacting to reports of a Congress rethink, Mr Kejriwal said yesterday, “We are concentrating on issues, not support. Whoever supports our 18-point agenda supports us,” he said. AAP leaders have said they are prepared for the Congress to pull the rug at any time.NDTV.