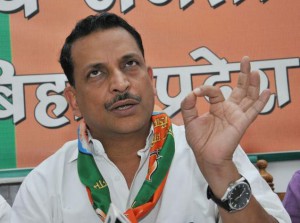 MUMBAI: A day after ending its 25-year-old alliance with Shiv Sena, BJP Friday ruled out a post-poll tie-up with the Sharad Pawar-led NCP after the October 15 Maharashtra Assembly elections.”The question doesn’t arise,” BJP general secretary in charge of state Rajiv Pratap Rudy said here.”Why should there be a future alliance? I can tell you with certainty that we are going it alone. They (Congress and NCP) are going to be non-existent in the state after elections,” he said.
The former Union minister said, “This is an insensible logic and a reckless argument that BJP will go with NCP after polls. Both Congress and NCP are equally to blame for the mess in Maharashtra.’Asked if Narendra Modi will play a key role in the BJP campaign in Maharashtra, Rudy said the Prime Minister is “most likely to be with us (for the campaign) after October 3.”The leadership in Maharashtra has requested the Prime Minister to be present and give his valuable time, he said. “He is the PM who has proved his position and has been elected. He is the face of India across the world,” Rudy said.
On curtains coming down on the Shiv Sena-BJP alliance, he said, “It was heart rending to part ways with Sena.” BJP’s central leadership had left the decision on the alliance to the state unit, he said. Maharashtra will witness a five-cornered contest, the BJP leader said.Asked if he favoured President’s rule in Maharashtra after NCP pulled out of the government, Rudy said, “Normally, this (President’s rule) is a natural consequence if a government has lost its majority and the chief minister quits, but I am not the right person or the authority to decide it.”To a question on who could be the next to leave the BJP-led alliance after Sena, he said, “This is all speculation.”