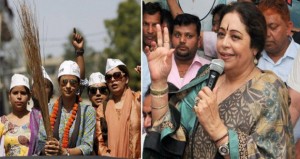 CHANDIGARH: Hitting out at Aam Aadmi Party candidate Gul Panag for her ’60-year-old’ remark, BJP candidate Kirron Kher on Sunday said that retirement age should be be made an issue as winners are decided by the people irrespective of their age.
Speaking in an interview to a private news channel Kirron said, “I think retirement should be decided by people whether they can mentally and physically handle something. You have 25-year-olds who are bimbos and you have 60-year-olds who are brilliant.”
The battle between two star candidates of AAP and BJP in Chandigarh not only being fought on streets but also on Twitter . Blaming Gul Panag for the on-going war, Kher said that Gul started it first. She said, “I am not about to let somebody else get away. You pulled the first punch, I will draw blood.”
Few days back Gul Panag tweeted, “Doubt if I’ll have the energy to run around like this and serve my people, when I’m 60. I guess that’s why there’s normally a retirement age.” Following which, Kirron Kher reacted, “My father is 101 years old and still happening. He said, ‘Good Luck Puttar. You have Always been winner.’ For me Life starts at 60.”