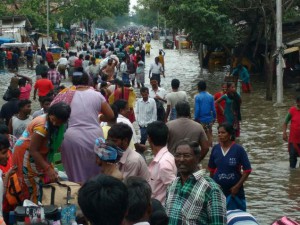 CHENNAI: Thousands of residents are fleeing north Chennai, where no rescue services have been operating. There are flash protests across the region, which has not received essential supplies in two days.
The Vyasarpadi bridge is completely blocked as is the Vallalar Nagar bridge with the mass exodus of thousands of people who are trying to leave. Ambulances too, are not able to get through. R.K. Nagar, Tondiarpet, Sathyamoorthy Nagar, Vallalar Nagar, Kodungaiyur and Mint are completely inundated and it is difficult to see dry land in these parts.
Residents who blocked the Vallalar Nagar bridge angrily screamed at officials saying that for the government, Chennai starts and ends at Poes Garden and Gopalapuram. “We have never been considered residents of Chennai and today you can see the effects of this,” the residents said.
Meanwhile, Prime Minister Narendra Modi is on his way to conduct an aerial survey of Chennai, which remains cut off with road, rail and air traffic crippled because of flooding after record rain.

Here are 10 latest developments in the story:269 people have died in Tamil Nadu and two in Puducherry since the heavy rain and floods began last month, Home Minister Rajnath Singh told Parliament today. He assured Tamil Nadu of all central help in this “unprecedented situation.”
“Leaving for Chennai to take stock of the situation arising due to the devastating floods,” he tweeted today.There has been no rain since last night, but the water level has been rising steadily in parts of Chennai. 35 lakes are reportedly flowing at dangerous levels, raising fears of more flooding as surplus water is flowing into Chennai.

“None of the drains can work with such heavy rain. If this kind of rain happens again, we are in for a tough time,” said the Commissioner of Chennai Corporation, Vikram Kapoor.

The Saidapet bridge over the Adyar river, which runs through the city, was closed to traffic yesterday as water spilled onto the road. The river is overflowing as surplus water from a lake was let into the river.The Met office has said the next 48 hours will be crucial and the rains will continue for a week.
The Chennai International airport will remain closed till December 6. The Rajali naval air station at Arakkonam, 70 km west of Chennai, will function as a makeshift airport.
The Navy’s amphibious carrier, INS Airavat, has been moved to Chennai with medical equipment, medicines and doctors. The ship is also taking 20 divers and swimmers and 15 boats.
Schools, colleges and offices have been forced to close and exams have been postponed. The campuses of IIT Madras and Anna University are flooded.
Telecom companies including BSNL, Airtel, Vodafone, RCom and Aircel have offered free talktime to their customers. Airtel, whose services have been impacted in certain areas, will offer talk time credit and free mobile data.