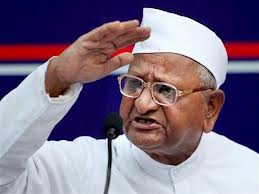 NEW DELHI : Anti-corruption campaigner Anna Hazare said on Sunday that he will participate in a farmers’ movement, scheduled to be held on February 24, against the land acquisition ordinance, saying he will request the Modi government to withdraw it keeping in mind the farmers’ cause.
“I will participate in massive movement of farmers against land acquisition ordinance, to be held on Feb 24 in Delhi,” Hazare told reporters here, According to a News Agency.
Hazare further said, “We will request the Govt to withdraw this anti-farmers ordinance through this movement.”A farmers’ body, last month, had announced that it would lay siege to Parliament on February 20 to protest the new Land Acquisition ordinance. The Rashtriya Kisan Mazdoor Sangthan had described the ordinance as a “kaala kanoon” (black law).
The Union Cabinet in December 2014, had approved the ordinance to amend the Land Acquisition Act, adding five more areas which will be exempted from the requisites given in the act.
Five areas were granted clearance for land for Defence purposes, rural infrastructure, affordable housing and housing projects for poor, industrial corridors, and infrastructure or social infrastructure projects, including those in public-private projects in which ownership of land will remain with the government.