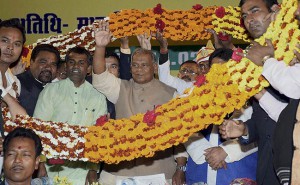 NEW DELHI : In May last year, when Jitan Ram Manjhi was handpicked by Nitish Kumar to replace him as Chief Minister after the Lok Sabha elections, he was labeled a “rubber stamp” because of his reputation of unwavering loyalty to his mentor.
In the nine months that he was in office, Mr Manjhi repeatedly punctured that perception. Last month, the 70-year-old refused to vacate the Chief Minister’s office to allow the return of Mr Kumar, as sought by their party, the Janata Dal United or JDU.
Mr Manjhi is a veteran in Bihar politics, a six-time legislator who served as a minister in previous state governments before joining the Janata Dal (United) in 2005. He was a minister in a Congress government in 1980 and was Education Minister in the government of Lalu Yadav’s Rashtriya Janata Dal in 1991.
In Bihar’s caste-ridden politics, Mr Manjhi’s status as a Mahadalit, one of the poorest castes, gives him considerable clout, and he plays the caste card generously.Mr Manjhi has been known for long to make controversial statements, though it is during his nine-month stint as Chief Minister that they have found the spotlight.
During the 2008 food crisis in Bihar, Mr Manjhi promoted eating rats as they had “equal food value as chicken.” Rat-catching is common with people of the socio-economically backward caste to which Manjhi belongs. Last November, he triggered another controversy by questioning the morality of women whose husbands have been working outside the state for several years. “Everyone knows what these women do as their husbands remain outside after marriage,” Mr Manjhi said at a public meeting.
His party, the JDU, had during his term as Chief Minister requested he weigh his words more carefully. Mr Manjhi was unmoved. His latest shocker was during a public address on the eve of his trust vote slated for Friday. “If you want to be a minster, come to me,” he said, indicating handsome dividends for defectors.
After he resigned today, Mr Manjhi added to his catalogue of five-alarm statements, declaring that legislators who wanted to side with him in the trust vote were receiving death threats.It is not clear yet if he will join the BJP ahead of the state elections this year.
Mr Manjhi is married with two sons and five daughters. One son was embroiled in a sex scandal that centred on his refusing to pay bills for a hotel where he allegedly met repeatedly with his paramour. Mr Manjhi’s son-in-law was appointed his person assistant and had to resign amid cries of impropriety over relatives being rewarded with important government posts.