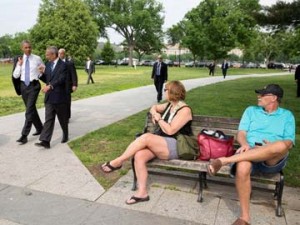 WASHIMGTON-DC: Some of Washington DC’s residents were in for a surprise when the President decided to take a walk… And strolling along with a suit jacket slung over his shoulder, it seemed as if Obama had made quite an impression.
President Obama was heading over to the nearby Department of the Interior from the White House and decided to break with tradition. On the way, he got a chance to meet with all sorts of folks, who weren’t expecting to meet the President of the United States of America. Obama chatted with tourists, shopkeepers and children during his walk to and from the Interior Department.
As one woman out shook his hand, she asked, “Are you real?”. The President said he was.  Another asked him if it was okay to get a picture and as Obama agreed, she said, “Omigosh! Someone’s gonna think you’re wax.” “The bear is loose!” he told trailing scribes at one point, the local press reported.