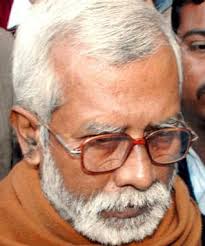 NEW DELHI :Some of the worst recent terror attacks in India, which collectively killed more than 100 people, were allegedly sanctioned by the Rashtriya Swayamsewak Sangh or RSS – this is what Swami Aseemanand, imprisoned for those attacks, has reportedly revealed to the Caravan, a newsmagazine. The RSS, which is the ideological parent of the main opposition party, the BJP, has denied the report.
Here are 10 big developments in the story:”The National Investigation Agency has no shred of evidence, even against those in jail. It’s just allegations galore. There is something fishy about this whole thing… we’re studying the whole thing, we will collect more information about what happened,” RSS spokesperson Ram Madhav told NDTV
Caravan says that in a meeting in Gujarat in 2005, Mohan Bhagwat, now the chief of the RSS, heard Aseemanand’s plans “to bomb several Muslim targets around India” and said, “It is very important that it be done. But you should not link it to the Sangh.”
As a top leader of the RSS’ tribal affairs wing, Aseemanand was based for years in the Dangs in Gujarat and focused on making advisasis convert to Hinduism instead of Christianity. According to the Caravan report, he said that in December 1998, after 10 days of communal violence, “Advaniji was the home minister and asked (then chief minister) Keshubhai Patel to rein me in.”
Aseemanand allegedly said after that, Narendra Modi met him at an RSS meeting in Ahmedabad and said, “Now it has been decided that I will be the CM. Let me come and then I will do your work. Rest easy.”
Caravan says its reporter interviewed 63-year-old Aseemanand in the Ambala Jail in Haryana four times over two years. Jail officials have launched an enquiry to determine how and why the reporter was given access to him.
“The contents of this article are false, baseless and concocted,” said Aseemanand’s lawyer JS Rana. He said the interview with his client never took place.
Home Minister Sushil Kumar Shinde said of the news article, “Let us see what he has said.  If he has made the disclsoure, it may be true.”
Aseemanand was arrested in 2010 for his alleged complicity in terror strikes between 2006 and 2008 that included the bombing of the Samjhauta Express in 2007.  Nearly 70 were killed on the train which was headed from Delhi to Lahore in Pakistan.  The charges against him include murder and sedition.
After he was arrested, he confessed in court in December 2011 to his role in the terror attacks he was charged with.  He also implicated the RSS.  However, he later retracted his confessions, alleging that he had been coerced to make them by investigating officials.
The BJP has alleged that the interview is concocted and blames the Congress’s “dirty tricks department” for trying to damage the BJP and the RSS in election season.