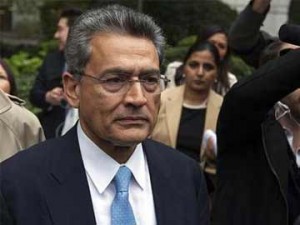 NEW YORK: India-born former Goldman Sachs director Rajat Gupta will have to report to jail next week to begin his two-year sentence on insider trading charges after the US Supreme Court rejected his bid to remain free on bail till his appeal for rehearing his conviction is decided on.
Mr Gupta, convicted in 2012 of passing confidential board room information to his friend and business associate Raj Rajaratnam, is scheduled to begin his prison term on June 17.US district judge Jed Rakoff, who presided over his trial, would recommend that 65-year-old Rajat Gupta be assigned to a medium-security prison in Otisville, about 70 miles northwest of New York City.
Mr Gupta had submitted a 118-page submission to Supreme Court Justice Ruth Bader Ginsburg on June 10, requesting to remain free on bail and saying that if an appeals court rules in his favour, he will “likely” be entitled to a new trial.
The former Mckinsey head, who has so far remained free on bail, said he presents no risk of flight or danger to the community, and he has abided by all conditions of release set by the district court.Ginsburg, who oversees emergency applications, denied Mr Gupta’s request in an order passed yesterday.Ginsburg made no comment on denying Mr Gupta’s request.
A spokesperson at the office of Mr Gupta’s lawyer Seth Waxman, a former US solicitor general, said Waxman does not usually comment on pending matters but added that “unfortunately Mr Gupta’s application was denied.”
The Harvard-educated Rajat Gupta is one of the most high- profile Wall Street executives to be convicted of insider trading, charges that were brought against him by Manhattan’s India-born top federal prosecutor Preet Bharara.
Apart from the two-year prison term, Mr Gupta has been ordered to pay USD five million in fine and a separate USD six million in restitution to Goldman Sachs.
Mr Gupta’s submission to the US Supreme Court was his last-ditch effort to avoid going to prison. He had last month filed a motion in the court of appeals to stay his surrender date and for bail pending the disposition of his rehearing petition but the court had denied that motion.
In his application to the Supreme Court, Mr Gupta had requested the “continuation of his release on bail pending the disposition of his petition for rehearing and rehearing en banc to the Second Circuit…and, if necessary, this Court’s disposition of his petition for a writ of certiorari”.