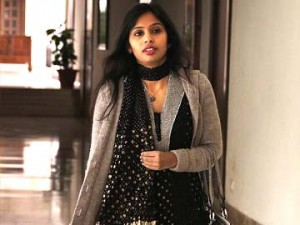 NEW YORK: An arrest warrant has been issued against Devyani Khobragade as US prosecutors yesterday re-indicted her on visa fraud charges and accused the Indian diplomat of “illegally” underpaying and “exploiting” her domestic help.
In a letter to United States District Judge William Pauley, US Attorney for the Southern District of New York Preet Bharara informed that Ms Khobragade is “believed” to be in India and the court will be alerted if and when she is arrested.
“An arrest warrant was also issued today. The Government will alert the Court immediately upon the defendant’s arrest so that an appearance before Your Honour may be scheduled. At present, the defendant is believed to be in India,” Mr Bharara said in the letter.He said the indictment alleges that Ms Khobragade made false statements to US authorities “to facilitate her exploitative employment of a household employee who was grossly underpaid and overworked.”
Mr Bharara said Ms Khobragade is unavailable because her “whereabouts are known but (her) presence for trial cannot be obtained by due diligence or (she) resists appearing at or being returned for trial.”
The new charges, which came a day after a US court dismissed an earlier indictment, accused her of visa fraud and making false statements about the visa application of her domestic help Sangeeta Richard.The 21-page indictment, filed by the office of India-born Bharara, states that the diplomat “knowingly made” multiple false representations and presented false information to US authorities in order to obtain a visa for a personal domestic help.
The fresh indictment filed in a federal court in Manhattan also charges that Ms Khobragade submitted to the US State Department an employment contract of her domestic worker which she knew contained “materially false and fraudulent statements.” A grand jury has returned a true bill on the two-count criminal indictment of Ms Khobragade.
The indictment said that “Khobragade did not want to pay the victim the required wages under US law or provide the victim with other protections against exploitative work conditions mandated by US law.”Knowing that if the US authorities were told the truth about the actual terms of her employment agreement with the victim, Khobragade would not have been able to obtain a visa for the victim, Khobragade decided to make false statements to the US authorities,” it said.
Devyani Khobragade was arrested on December 12 on visa fraud charges and for making false statements regarding the visa application of Richard.
She was strip-searched and held with criminals, triggering a row between the two countries with India retaliating by downgrading privileges of certain category of US diplomats among other steps.
The diplomat, who was transferred back to India and is now with the Ministry of External Affairs, has refuted the charges against her.The re-indictment comes a day after 39-year-old Khobragade got relief from District Judge Shira Scheindl who said in her order “it is undisputed” that she acquired full diplomatic immunity at 5:47 pm on January 8 after the US State Department approved her accreditation as a counsellor to India’s mission to the UN.
The ruling had, however, left open the possibility that US prosecutors could bring a new indictment against Ms Khobragad.