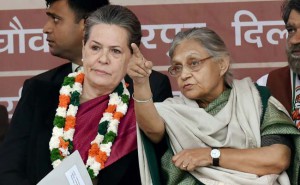 NEW DELHI : Addressing her first election rally in Delhi, Congress President Sonia Gandhi on Sunday attacked both the Narendra Modi-led central government and the Aam Aadmi Party.
Without directly naming either the AAP or the BJP, Mrs Gandhi said, “Who is responsible for this situation in Delhi? It’s the party who ran away from its responsibilities as well as those who were imposing their own rule in name of President’s rule.”
In another apparent dig at PM Modi and AAP leader Arvind Kejriwal, she declared, “One is a pracharak (campaigner) and the other one is a dharna baaz (agitator). The country does not run on speeches. We need the spirit of struggle and dedication.”
The Congress President, who was addressing a rally at south-east Delhi’s Badarpur, spoke for a little over 15 minutes, and dedicated a major portion of her speech in attacking the Modi government.

Targeting the Modi government at the Centre over its campaign promise of bringing in ‘achche din’ (good days), Mrs Gandhi said, “The Modi government is in power now. I want to ask what happened to the promised Rs. 15 lakh that they were supposed to give after getting back black money? What happened to jobs for the youth? Where are the reduced prices? This is the reality of the hollow promise of ‘acche din’.
Mrs Gandhi also spoke at some length about what were, according to her, the achievements of the Congress-led UPA government as well as the Sheila Dikshit-led Congress government that had ruled Delhi in 15 years.
She said while the Manmohan Singh-led central government strengthened land rights through the Land Acquisition Bill, the current government, has “opened it up for land grabbers.”
Speaking about Delhi’s progress, Mrs Gandhi said: “15 years ago, when the BJP was in power, the air was so polluted that you could not breathe. There would be long power cuts, poor connectivity. The Sheila Dikshit government worked very hard to make Delhi an excellent city.”
Interestingly, Ms Dikshit, who has been missing from Congress’ rallies and campaigns, made her first appearance today at Mrs Gandhi’s rally.  Old timers from Delhi Congress, Jagdish Tytler and Sajjan Kumar, both named in the anti-Sikh riots of 1984, were also seen at the rally ground. But they didn’t share the dais with Mrs Gandhi.