No prizes for guessing which political family is keen on adopting two big cats under the animal adoption scheme planned by Sanjay Gandhi National Park (SGNP). Even as the scheme awaits final clearance from the state government, a close aide of Shiv Sena Executive President Uddhav Thackeray had contacted the park authorities, saying that the Thackeray family wants to adopt two tigers. 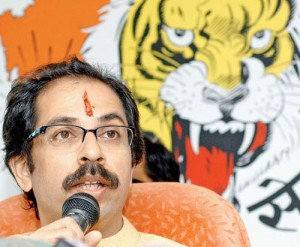 Say cheese: Shiv Sena Executive President Uddhav Thackeray is an avid wildlife enthusiast and also a prolific photographer. In this picture from our archives, Uddhav is seen clicking frames of a circus tiger. (Below) The MiDDAY report on September 7, 2013

Speaking to MiD DAY a senior forest department official said, “More than a month ago, a very close aide of Uddhav Thackeray had contacted us to say that he is keen on adopting the captive tigers from SGNP. We told them that approval for the animal adoption scheme proposal is pending with the state government, and once it gets cleared we will inform them of the same, so that they can move forward with the procedure.”

Big cats calling: Uddhav Thackeray and his sons Aaditya (Below) and Tejas are all wildlife enthusiasts. File Pics

The Thackerays’ love for tigers comes as no surprise, as the beast is their party logo. Thackeray is also an avid wildlife photographer. The party scions Aaditya and Tejas are also wildlife enthusiasts.

“If the politicians come forward to adopt the animals, it will not only send a positive message to the public, but also help in the conservation of wildlife,” added the official.

More takers
The Thackerays are not alone. An international school has already approached SGNP to ask about the adoption of lions. Confirming the development, Chief Conservator of Forests and SGNP Director Sunil Limaye said, “An international school from Mumbai has already approached us saying that they want to adopt a lion, which is a good sign. We have told the school that the proposal for the animal adoption scheme is still with the state finance department for final approval, and once it is cleared, we will inform the school so that they can start the adoption procedure.” Shiv Sena Executive President Uddhav Thackeray remained unavailable for comment. “He neither accepted nor denied the tiger adoption plans,” said a source close to Matoshree. The proposal was sent to the government by the SGNP more than two months ago, and approval for the same is still pending with the state finance department.

SGNP’s animal adoption scheme
The SGNP authorities have sent the proposal to the state government for putting captive wild animals up for adoption. As per the proposal, about 50 to 60 animals would be up for adoption for a period of one year. The money raised through the adoption would be spent on the animal’s food, maintenance of its enclosure and its medical treatment for an entire year. Once every month, the adoptee and his or her family will be allowed to visit the animal. In addition, a plaque bearing the adaptor’s name will be displayed around the enclosure of the animal he or she has adopted.

Rs 3,05,000 Cost to adopt one tiger for a year under Sanjay Gandhi National Park’s proposed scheme