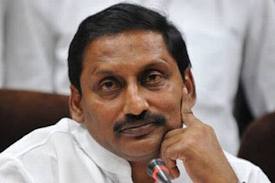 HYDERABAD : Andhra Pradesh Chief Minister Kiran Kumar Reddy has said the AP Reorganisation Bill sent to the state assembly “should go into the dustbin in this form” and has warned that splitting the state for electoral gains will have “dangerous consequences.”
Mr Reddy. who engineered the assembly’s rejection of the move to create a separate Telangana state yesterday, told NDTV in an exclusive interview, “Telugu people have to decide their future. We don’t want someone else to decide for us and put us in dispute.”
“We passed the resolution rejecting bifurcation. Hope the Centre takes note of this. No state has been formed in the country without a resolution,” he said.
The Chief Minister argued that if the opinion of the Assembly did not matter, the Bill should not have been sent to it at all, and said he was confident that the state will go into the 2014 general elections, due by May, as a united state.
Hours before Mr Reddy spoke to NDTV, senior Congress leader Digvijaya Singh asserted that his party is firm on bringing the Telangana Bill to Parliament for a vote in the February session, the state Assembly’s rejection notwithstanding. He criticised Mr Reddy, saying that as Chief Minister he must not seem to act as a regional leader.
Mr Reddy refuted the allegation that he was acting like “the CM of Seemandhra” and said, “I am acting as statesman and CM but they, the Centre, are acting as representatives of Telangana. My role as the people’s representative is more critical than my role as Congressman.”
Kiran Kumar Reddy belongs to Seemandhra – the Rayalaseema and coastal Andhra regions that will be the residual portion of Andhra Pradesh if Telangana is carved out of it. People and political leaders of Seemandhra oppose splitting the state.
“My future is not what I am worried about but the future of state,” Mr Reddy said.

He is meeting all MPs and MLAs from Seemandhra over the next two days to decide on the way forward in this bitter and acrimonious battle to keep state united.