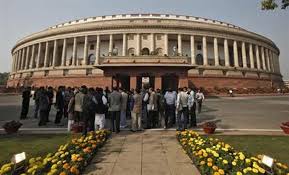 NEW DELHI : A controversial bill to create Telangana by dividing Andhra Pradesh may be taken up in the Lok Sabha today, and there is unprecedented security in Parliament after a suicide threat by an MP.
Fire extinguishers and blankets have been kept on the ready after a Congress MP allegedly threatened to set himself afire to protest against Telangana.  The MP, Sabbam Hari, is one of the six that the ruling party expelled for moving a no-confidence motion against the Prime Minister, to signal that it will not tolerate dissent and that it is determined to push through its Telangana plan. The six MPs belong to the non-Telangana regions of Seemandhra, which are vehemently opposed to bifurcating Andhra Pradesh.
No visitors are being allowed in the Parliament House and even those entering the press galleries are being put through rare checks.Prime Minister Manmohan Singh met top ministers before Parliament began to discuss whether to bring the bill today, as the government anticipated trouble.
Members in blindfolds protested in the Rajya Sabha, shouted slogans and held up placards. Both houses were adjourned within minutes as Andhra Pradesh MPs, including ministers, vowed to block the Telangana bill.
“This government can’t bring the bill. It’s a minority bill. Its own ministers are opposing it and they are depending on the Opposition to pass it, said L Rajgopal.
There have been ugly and embarrassing clashes in Parliament since last week. “My heart bleeds to see what is happening in the House. This is bad for democracy,” said the Prime Minister yesterday, after two MPs nearly attacked each other before other lawmakers intervened.
At a lunch hosted by the Prime Minister on Wednesday, senior BJP leaders made it clear that the bill to create Telangana “cannot be passed in the din,” without a proper discussion. The PM and other ministers reportedly agreed to ask the Speaker to find a way out.
This session, which ends on February 21, is the last before the election, due by May. Since it began about a week ago, Parliament has been paralyzed with angry disruptions over Telangana. Papers have been torn and flung inside the Rajya Sabha and the chairman’s mic pulled out.