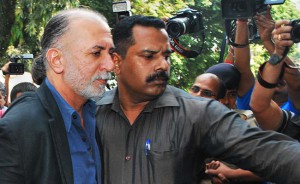 MUMBAI: Tehelka founder Tarun Tejpal has been dropped from a literary festival organized by the Times of India, which faced massive criticism online for inviting the rape-accused editor.Senior journalist and columnist Bachi Karkaria, the director of the festival, tweeted:
The organisers of the “Times of India Literary Carnival” were virtually bombarded with angry tweets, messages and articles after posting a schedule that named Mr Tejpal as part of a panel titled “The Tyranny of Power.”
It would have been the 50-year-old editor’s first public event since the scandal erupted in November last year, and many guests had reportedly sent messages to the organisers expressing disquiet.The panel is to be chaired by journalist Manu Joseph and includes screenwriter Basharat Peer and Mani Shankar Aiyar, a former diplomat and member of the Congress Party.
Mr Aiyar was quoted by the Wall Street Journal as saying he would attend the panel despite the objections to Mr Tejpal’s presence. “People do have very strong views on this, so I’m not surprised they have concerns. The man is under indictment, but he has the right to defend himself and while he’s on bail, there are no restrictions on where he can appear,” Mr Aiyar told the newspaper.
Mr Tejpal is being tried for allegedly raping a colleague during a Tehelka event at a hotel in Goa in November last year, an incident that was first revealed through leaked office mails that went viral. He was arrested days later, and granted bail by the Supreme Court after eight months.In an email response to the Scroll website, which documented its protest in several articles, Ms Karkaria said the panel was part of the event’s overarching theme of Power as Hero and Villain and has “nothing to do with his personal case.”
On Twitter, there was instant response to Mr Tejpal being “uninvited”. One tweet said, “#ToiLitFest withdraws their invitation to Tejpal. Good. But I wont forget that they invited him in the frst place. They cant undo that.”