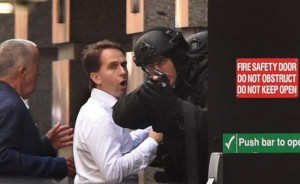 SYDNEY:  An armed man held several hostages inside a popular cafe in Sydney on Monday morning and forced some of them to hold up a black flag with white Arabic writing against the window, sparking a security lock-down in the heart of Australia’s commercial capital.Hours later, five people ran out of the building that was under siege.
The Sydney police said at least one armed offender was holding hostages at the Lindt Chocolate cafe in Martin Place, a major shopping and pedestrian thoroughfare near the Sydney Opera House in the central business district of the city. Some 30 people were said to be in the cafe; when the gunman entered at around 9.45 in the morning.
Terrified customers were seen pressed against a window, holding a flag with writing that appeared to be the shahada, or profession of faith in Islam, and said: “There is no god but Allah; Mohammed is the Messenger of Allah.”Around six hours after the crisis erupted, five people, including two women, were seen bolting out of the building past heavily armed police
.Senior Sydney Police officer Catherine Burn said negotiators “have had contact and continue to have contact” with the person holding the hostages.Major landmarks including the Sydney Opera House have been evacuated. Banks have shut down their offices in the area. Helicopters are hovering above as a large number of heavily armed personnel were holding crowds back.Prime Minister Tony Abbott, who has warned of militant plans to attack
Australian targets, held a meeting of the cabinet’s national security committee for a briefing on the hostage situation.The US has evacuated its Sydney Consulate, which is located near the Lindt cafe, and issued an emergency warning to its citizens in Sydney.
The Indian consulate, about 400 metres from the cafe, has also closed down.The hostage crisis unfolded just as the police announced a man had been arrested in Sydney on alleged terrorism offences as part of ongoing investigations into plans for an attack on Australian soil.
Australia, which is backing the US and its escalating action against Islamic State in Syria and Iraq, is on high alert for attacks by radicalised Muslims or by home-grown fighters returning from the conflict in the Middle East.Prime Minister Narendra Modi tweeted, “The incident in Sydney is disturbing. Such acts are inhuman & deeply unfortunate. I pray for everyone’s safety.”