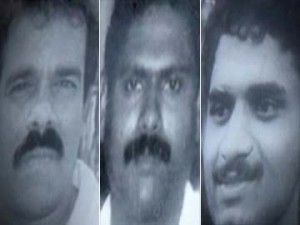 NEW DELHI : The Supreme Court today commuted the death sentence of three men convicted of killing former prime minister Rajiv Gandhi to life in prison and left it to the Tamil Nadu government to decide whether to release them by granting them remission.
The convicts, Santhan, Murugan and Perarivalan, had petitioned against their death sentence, arguing that there had been an exceptional delay in a decision on their mercy plea.
A bench headed by the Chief Justice of India, P Sathasivam, today granted them mercy, rejecting the Centre’s view that the convicts did not deserve it. The Centre’s lawyer, Attorney General Goolam Vahanvati, had said there was “not a word of remorse” in the convicts’ petition for mercy.
“They were leading a disciplined life, entertaining and educating inmates, so there is no agony, torture or dehumanizing effect due to delay,” he said. The lawyer for the convicts argued that “agony and torture need not be physical injuries.”
On January 21, the Supreme Court commuted the death sentences of 15 convicts, announcing that “inordinate and inexplicable” delays in carrying out executions were grounds for reducing their original punishment.Santhan, Perarivalan and Murugan were convicted in 1998 for Mr Gandhi’s assassination in 1991.
Their mercy petition was sent to the President of India, the last stage in the process of appeals, in 2000 and was rejected 11 years later. Their hanging was stayed in 2011 on the orders of the Madras High Court.
Murugan’s wife Nalini was also sentenced to death but it was commuted to life on the intervention of Rajiv Gandhi’s widow Sonia Gandhi.