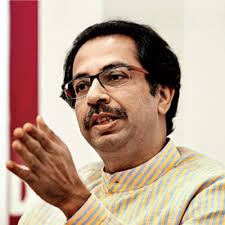 NEW DELHI: After exit polls predicted Bharatiya Janata Party (BJP) emerging as the single largest party in Maharashtra, Shiv Sena has softened its stand and hinted towards allying with its erstwhile ally.
The Shiv Sena, which viciously attacked BJP and Prime Minister Narendra Modi during election campaign, in an editorial in its mouthpiece, Saamna, on Friday said that though hearts have been broken, there is no need to have arguments or bitterness anymore.
In an apparent reference to a possible alliance with its estranged ally BJP in the post poll scenario, Uddhav Thackeray-led Shiv Sena in its editorial asserted that whatever happened between the two parties is past and Maharashtra needs stability and for that some compromises may have to be reached.
The Congress and NCP, which were ruling Maharashtra for 15 years before they split ahead of the elections, were projected to lose heavily while Shiv Sena was predicted to emerge as the second largest party in the exit polls.
During the poll campaign Uddhav Thackeray got personal when he dragged the name of the father of PM Narendra Modi.
In an editorial in the Shiv Sena mouthpiece `Saamna`, Thackeray said Modi did not win elections on his own. Now when Modi is the PM, he does not recognise the Maharashtra party anymore. He had indicated this at the time of the formation of Cabinet after winning Lok Sabha elections, said Thackeray.
The Shiv Sena chief added that if his party would not have extended support, even Modi’s father, Damodardas, could not have won majority in Lok Sabha elections.One exit poll conducted by ‘Today’s Chanakya’ gave a clear majority to BJP in both Maharashtra and Haryana.
Maharashtra, where PM Modi addressed 27 rallies, appears to be heading for a BJP government for the first time in the state’s history.According to C-voter exit poll telecast on Times Now, the BJP was projected to get 138 out of 288 seats. Its erstwhile ally Shiv Sena was projected to get 59 seats while Congress was predicted to bag 41, NCP 30, MNS 12 and others 8.
For a majority, a party has to get 145 seats.
In the outgoing assembly, BJP had 47 seats while Shiv Sena had 45. Congress had 82 seats, NCP 62 and MNS had 12.Exit poll conducted by AC Nielson for ABP News channel gave BJP 144 seats, Shiv Sena 77, Congress 30, NCP 29 and MNS 3.Today’s Chanakya exit poll telecast on News24 channel gave BJP and allies a clear majority with 151 seats while Shiv Sena was given 71. Congress was given 27 while NCP 28. The numbers for MNS were not available while Others were projected to get 11.