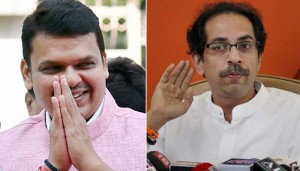 MUMBAI: After weeks of acrimony, the Shiv Sena and the BJP are believed to be again holding talks on forming an alliance in Maharashtra.Sources said the two parties are near to a deal on Shiv Sena joining the Devendra Fadnavis government in the state. Also, Shiv Sena’s Rajya Sabha MP, Anil Desai, will also join the Narendra Modi government as a minister of state.
As per sources, the deal was reached between BJP president Amit Shah and Shiv Sena chief Uddhav Thackeray.Shiv Sena is likely to get 10 berths in the Fadnavis government, with at least four of Cabinet rank.The Sena is believed to have agreed not to claim the deputy chief minister’s post – it, however, may get the Home portfolio.
Reports said Power, PWD, Health and Rural Development are among other portfolios that the Sena may get.In the 288-member Maharashtra Assembly, while the BJP has 122 MLAs the Shiv Sena is the second largest party with 63 legislators.