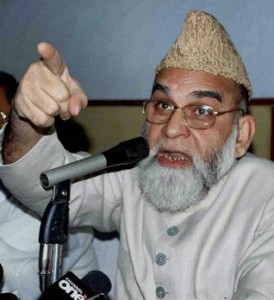 NEW DELHI: In a boost to the Congress ahead of the upcoming Lok Sabha elections, the Shahi Imam of Delhi’s Jama Masjid on Friday announced support for the incumbent party.
Addressing a press conference here a few days after he met Sonia Gandhi, Syed Ahmed Bukhari said the Congress has done a lot for the Muslims.  “I met Sonia Gandhi and discussed a lot of issues related with Muslims with her,” Bukhari said. Endorsing Congress and issuing a appeal to vote for the party, Bukhari said, “We announce support for the Congress.”
“I support Congress on the condition that they will fulfill promises made to the Muslim community.”  “We will support all allies of the Congress including the RJD,” he added.  Replying to reporters’ questions, the Shahi Imam said he was not issuing a fatwa for Muslims to vote in favour of the Congress, but only issuing an appeal.
“It’s is not a fatwa that we have issued; it’s an appeal. This is just a support and opinion that I have expressed, it is not an order,” he clarified.  Defending his support, Bukhari said, “Under the Indian Constitution there is no rule that a religious head can’t have an opinion and express it.”
He also appealed people to vote for the Trinamool Congress which has done a lot of work for the community in West Bengal.  “The TMC has taken steps in favour of Muslims. I appeal voters in West Bengal to support TMC candidates, as it has clearly said it will not back NDA,” he stated.
“It seems like Mamata Banerjee will seriously try to work towards solving problems of the Muslims,” he added. The Shahi Imam ruled out endorsing the Samajwadi Party and the BSP, saying the former had even played a role in last year’s Muzaffarnagar riots.
Even the Supreme Court has blamed the SP government in Uttar Pradesh for failing to take steps to prevent communal violence, Bukhari said.  He slammed the SP and the BSP for having done little for the Muslims. “BSP has showed it could align with anyone to be in power, so we can’t support it,” he said.  Bukhari, at the start of his press conference, said the nation faces danger from communal forces and “we should ensure that secular votes are not divided”.