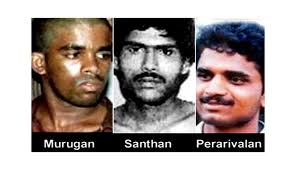 NEW DELHI :The Supreme Court Tuesday reserved its verdict on a plea by the three assassins of former prime minister Rajiv Gandhi seeking commutation of their death sentence to life imprisonment on the grounds of an inordinate delay of nearly 11 years in deciding their mercy petitions. The centre has opposed the plea.
Responding to the plea by three assassins – V. Sriharan @ Murugan, Perarivalan and Santhan – the government urged the court to reject them, saying that they suffered no agony or dehumanization during the 11 years when their mercy petitions were pending with the president.
Attorney General G.E. Vahanvati told an apex court bench of Chief Justice P. Sathasivam, Justice Ranjan Gogoi and Justice Shiva Kirti Singh that the petition was not covered by its Jan 21 verdic that said that inordinate, unexplained, unreasonable delay was a ground for commuting death sentence into life imprisonment.
Vahanvati told the court that all through these 11 years, the three assassins were living a full life by holding music shows, art exhibitions and other recreational activities in the jail.
“This shows they were not hardened criminals,” observed Chief Justice Sathasivam.
Having pointed out that they suffered on agony, torture or dehumanizing situation, Vahanvati wondered: “Do they require the intervention of this court (SC) on the grounds of torture and dehumanised life.”
He also said that in the mercy petition to the president filed April 26, 2000, there was not even an iota of remorse for their action of killing the former prime minister and they even justified it.He said that this absence of remorse assumes serious connotation because their mercy petition to the president was made after their similar plea was rejected by the Tamil Nadu governor.Appearing for the three death row convicts, senior counsel Yug Chaudhary said: “Delay per se is torture. I don’t have to prove torture.”
Chaudhary told the court that they killed Rajiv Gandhi on account of a personal grudge stemming from the IPKF’s actions in dealing with Tamils in Sri Lanka. Rajiv Gandhi was killed in 1991.
Rajiv Gandhi’s assassins were convicted by the TADA court in January 1998 and were awarded death sentence. Their death sentence was confirmed by the apex court May 11, 1999.
In August 2012 their mercy petitions were rejected and as the date of their execution was fixed, the Madras High Court intervened and the execution of the death sentenced was stayed.
Subsequently on a plea by MDMK leader Vaiko, the matter before the Madras High Court was transferred to the Supreme Court.