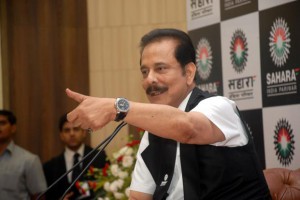 NEW DELHI : The Supreme Court on Wednesday refused to give an early hearing to Sahara chief Subrata Roy who sought relief on the grounds that he was unwell.
As per reports in the media, the SC will hear Roy’s plea on November 25. The apex court will also consider market regulator SEBI’s plea on Rs.47,000 cr repayment from Sahara, reports said.
As the counsel for Roy mentioned the matter before a bench headed by Justice T.S.Thakur yesterday, the court said that it would take it up for hearing but asked Roy`s lawyer to serve the application on the government`s counsel.
“In the meantime if he needs any medical attention we can direct it,” the court said as it appeared it would take a couple of days before the application comes up for hearing.
Roy and two Sahara directors are in judicial custody from March 4 for not complying with the 2012 order of the apex court to return investors money collected in 2008-09.
By a subsequent March 26 order, the court had asked Sahara to deposit Rs.10,000 crore – Rs.5,000 in cash and Rs.5,000 in bank guarantee – as part payment for investors` money that its two companies SIRECL and SHICL had collected through optional fully convertible debentures.
Roy and two other directors – Ravi Shankar Dubey and Ashok Roy Choudhary – are currently under custody since March 4 for the failure of SIRECL and SHICL to comply with the apex court`s Aug 31, 2012, and Dec 5, 2012, order to return investors` money, which in 2012 was Rs. 24,000 crore.
However, market regulator now says that this amount has shot up more than Rs.37,000 crore with Income Tax department making a tax claim of Rs.4,800 crore.