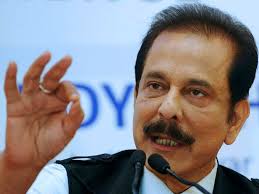 NEW DELHI : The Supreme Court Tuesday refused to release Sahara Chief Subrata Roy, who has been behind bars for nearly five months, on interim bail or parole but allowed selling of his luxury hotels in New York and London to raise money to deposit Rs 10,000 crore with SEBI as directed to get regular bail.The apex court, however, assured 65-year-old Roy that it will allow him to go out of jail during day time under police custody to hold negotiations with buyers to dispose of his properties.

“There is, at present, no concrete proposal with Saharas’ for sale of the properties situated in India or abroad that may call for any negotiation by Shri Subrata Roy Sahara. While it may be true that such negotiations cannot be said to be advisable when properties of such magnitude as in the instant case are sought to be sold, yet it is premature for us to make any arrangement to facilitate any such negotiations either by directing release of Shri Subrata Roy Sahara on parole or otherwise,” a bench headed by Justice T S Thakur said.
The bench, also comprising justices Anil R Dave and A K Sikri asked him to approach the court when there is a proposal and assured him that suitable arrangements would be made by it.”We may make it clear that if a situation arises in which negotiations become essential, this Court may consider passing orders to facilitate such negotiations. Beyond that we do not consider it necessary or proper to say anything at this stage,” it said.
The bench also rejected the plea of Roy for releasing him on parole on health grounds.

“There is nothing before us to show that Shri Subrata Roy Sahara suffers from any serious medical condition. At any rate, we expect the jail doctors to keep a check on his medical condition and provide necessary medical aid as and when required,” it said.The bench, which had earlier allowed Sahara to sell nine properties in the country, permitted it to sell hotels Dream Downtown and The Plaza in New York and Grosvenor House in London.
It also appointed senior advocate Shekhar Naphade as amicus curiae to assist the court in dealing with the case in which the group is supposed to pay around Rs 37,000 crore to wind up the proceedings in the apex court.”…Three offshore hotel properties owned by Saharas are allowed to be transferred, sold or encumbered subject to the condition that the entire sale consideration received by the Saharas after repayment of the loan outstanding towards the Bank of China is deposited with SEBI towards compliance with the directions contained in the conditional bail order dated 26.3.2014 passed by this Court.
“The excess amount, if any, shall be deposited by the Saharas in a separate account to await orders from this Court regarding their utilisation. The sale of the offshore properties shall not be at a price lesser than the value estimated by CBRE and JLL for the said properties reduced at the most by 5 percent of such value,” the apex court said.
Subrata Roy had pleaded that he be allowed to get out of jail on parole or on interim bail for at least 40 days to sell his properties to raise Rs 10,000 crore to get bail.
Roy, who was sent to jail on March 4 this year for non-refund of over Rs 20,000 crore to depositors, was asked by the court to pay Rs 10,000 crore to get bail, out of which Rs 5,000 crore in cash and rest of the amount in bank guarantee.Sahara has so far raised Rs 3,117 crore which has been deposited with the market regulator.
The group, however, has been claiming that it has already repaid money to 93 percent investors.Senior advocate Rajeev Dhavan, who argued Roy’s plea, expressed his dismay over the outcome saying he never expected the new bench to take such a “strict view on a person who has been in incarceration for more than four months”.”I am astonished and deeply pained by the orders of this court. I have not sensed justice like this,” he said.
However, the bench told the senior advocate that it was not altering the terms of conditions set by the previous bench for grant of bail and the order passed today has some portion which was in his favour.”We could have reduced your astonishment if it had been an appeal… Your astonishment should be with another bench,” the apex court said while referring to the June 4 order passed by the bench of Justices K S Radhakrishnan (since retired) and J S Khehar.Dhavan said, “I (Roy) came to this bench with good faith. I have already deposited Rs 3,000 crore. No person can be sent to jail like this.”
The bench said, “we decided the case in our wisdom and your client may not like it. But we allowed you to sell nine of your domestic properties and also allowed you to sell your off-shore properties”.As soon as Dhavan stopped, the bench said, “should we take leave now”.
This did not go well with Dhavan, who told the bench “Don’t make fun of me. You gave me benefit of conversation”.