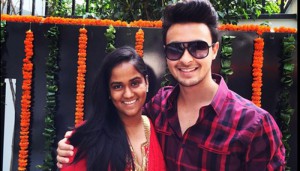 HYDERABAD: Top Bollywood stars will descend on Hyderabad Nov 18 as Salman Khan’s youngest sister Arpita ties the knot with her long-time fiance and businessman Ayush Sharma at a gala ceremony.Preparations for the wedding are in full swing at Taj Falaknuma, the luxury heritage hotel of the Taj Group located in the old city. The actor’s family has booked the entire hotel for two days, Nov 18 and 19, to ensure that nobody gatecrashes the festivities.
The popular star, who has a huge fan following in this city, has invited Prime Minister Narendra Modi for the wedding but the latter is unlikely to make it. The superstar personally met Modi a few days ago in Delhi to invite him but the the prime minister expressed his inability as he will be away on a three-nation tour to Myanmar, Australia and Fiji.The actor is also believed to have invited Congress president Sonia Gandhi, but she is also not likely to come.
Amitabh Bachchan and Shah Rukh Khan top the long list of invitees to the wedding. While Amitabh has not yet confirmed his participation, King Khan and his wife Gauri are likely to make it in view of their close ties with Salman’s family.
Aamir Khan, Katrina Kaif, Hritik Roshan, Deepika Padukone, Saif Ali Khan, his wife Kareena Kapoor, Dharmendra, his wife Hema Malini, Karan Johar, David Dhawan and several other film personalities have reportedly confirmed their participation.From Tollywood, as Telugu film industry is popularly called, actor-turned-politician Chiranjeevi, his son Ram Charan Teja, Nagarjuna, Venkatesh and their families will be among select guests.
Salman and his father Salim Khan have invited leading politicians, sportspersons and corporate honchos for the ceremony. About 300 guests are likely to attend the wedding.Bollywood celebrities usually head to Jodhpur for marriages at the opulent palaces-turned-luxury hotels but this is the first time that a leading Bollywood family chose Hyderabad.
Top Bollywood stars visiting Hyderabad for shoots frequent Falaknuma, one of the most beautiful palaces of Nizam, the ruler of erstwhile Hyderabad State.The palace, which the Taj Group converted into a luxury hotel and threw it open four years ago, has 60 lavish rooms, decorated halls and a 101-seat dining hall, said to be the biggest in the world. Its Durbal Hall, embellished with intricately carved wooden ceilings, parquet flooring, regal walnut wood furniture and handcrafted mirrors, had once hosted guests like King George V and Czar Nicholas II.
Located five kilometres from Charminar, Falaknuma, or ‘mirror of the sky’ in Urdu, is the scorpion-shaped, all-marble palace and was once the residence of Mir Mahboob Ali Khan (1869-1911), the sixth Nizam.Perched atop a hill, the palace in 2010 opened its doors to guests with all its opulent interiors and breathtaking views.
It was Nawab Vaqar-ul-Umra, the Nizam’s prime minister, who built the palace in 1893. Impressed by its magnificence, the Nizam bought it for himself.Though the Taj Group converted several palaces into luxury hotels, Falaknuma stands apart in its splendour and majesty.
Salman Khan is said to have paid Rs.2 crore to book the hotel for two days. Sources said this was done to ensure that nobody gatecrashes by booking tables at restaurants or by visiting spas. The family will have its own security to screen the guests. The hotel staff will work as per their instructions to ensure smooth arrangements.
Marriages in some rich families like the family of industrialist G.V.K. Reddy were performed at Falaknuma but this will be the first time that the palace will witness the wedding of a Bollywood family.Sources said Hyderabad-born actress Dia Mirza also wanted to celebrate her wedding at Falaknuma but negotiations for a better price made no progress and she finally dropped the plans.
A couple of suites, including the one which was used by Nizam, are the most expensive. The hotel charges over Rs.5 lakh a night for the Nizam suite.It’s not just Rs.2 crore which Salman’s family will be spending on the celebrations. All the wedding planners, caterers and specialists providing services from makeup to decoration to mehendi and sangeet will be flown in from Mumbai for the grand celebrations.