NEW DELHI : Sahara has told the Supreme Court that it cannot pay Rs. 5000 crores upfront to secure bail for its chief Subrata Roy and has offered to pay in installments.It proposed in court today that it would pay Rs. 2500 crores immediately and another Rs. 2500 crores 21 days after Mr Roy’s release. The court has asked Sahara to file its proposal on registry and not hand it over across the table. 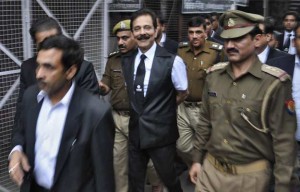 Hearing Mr Roy’s plea that the court order sending him to jail is illegal, the top court observed that putting him behind bars is not a punishment, but to enforce its orders.”Don’t interpret March 4th order as punishment, it is just enforcing our orders. We will go into the punishment aspect once contempt proceedings are over. It’s not a punishment,” the court said.The Supreme Court also observed that “Rs. 10,000 crores is not a bail bond. By paying Rs. 10,000 crores out of Rs. 37000 crores, you will show your bonafide.”
Last week, the court had asked Sahara to deposit Rs. 5,000 crores with the court and furnish a bank guarantee of another Rs. 5,000 crores with market regulator SEBI or the Securities and Exchange Board of India.Mr Roy, 65, was arrested on February 28 for failing to refund Rs. 20,000 crores raised by Sahara from small investors through two bond schemes that were declared illegal in 2012.
With Sahara struggling to raise the money, the court had said last week that Mr Roy would remain in Delhi’s Tihar Jail for another week, posting the next hearing for today.Different proposals offered by Sahara since Mr Roy’s arrest to refund investors in installments have been turned down as inadequate by the Supreme Court.
Sahara’s lawyers have appealed to the top court to release Subrata Roy and two other directors on bail, assuring the court that they “won’t run away”.
Sebi had brought contempt proceedings against Mr Roy and Sahara for failure to comply with a 2012 Supreme Court order to repay billions of dollars to investors. Sahara had earlier argued that it repaid most investors and that its remaining liability was less than the Rs. 5,000 crore it deposited with Sebi, a claim that has been disputed by the regulator and the court.
Sahara is best known as the former main sponsor of India’s national cricket team, as well as owner of New York’s Plaza Hotel and London’s Grosvenor House. It has a net worth of $11 billion or around Rs. 66,000 crore ($1=Rs. 60) and more than 36,000 acres of real estate, according to its website. It also co-owns the Sahara Force India Formula One auto racing team with liquor baron Vijay Mallya.