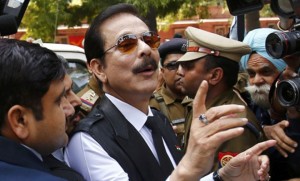 NEW DELHI : the 65-year-old head of the Sahara conglomerate, will remain in Delhi’s Tihar Jail, where he was placed on Tuesday night, the Supreme Court said today, rejecting as “an insult” a proposal from the firm to repay thousands of crores to small investors.”Don’t make us assemble if you don’t have a better offer. This is a dishonest proposal,” said the judges, fixing the next hearing for Tuesday.
Mr Roy was arrested on Friday after he failed to convince judges that he is serious about repaying nearly Rs. 20,000 crore for two Sahara bond schemes that were declared illegal in 2012. Mr Roy’s lawyers, arguing for his release, said he is needed to participate in negotiations to raise the money needed for the refund.”You have been in jail for two days… for one and a half years, you were out,” the judges retorted.
They, however, made it clear that Mr Roy’s lawyers and financial consultants must be allowed to meet him every day in jail between 10 am and noon.Sahara’s lawyers offered today for Rs. 2,500 crore within three working days with the Securities and Exchange Board of India (SEBI); they said the balance would be paid in instalments every three months.Sahara had earlier this week proposed that SEBI begin selling its properties until it comes up with the bank guarantee. SEBI has argued that it does not have the needed paperwork for some of those properties and says Sahara has greatly exaggerated their worth.
SEBI had brought contempt proceedings against Mr Roy and Sahara for failure to comply with the 2012 Supreme Court order to repay crores. Sahara has said it repaid most investors and that its remaining liability is less than the Rs. 5,000 crore it has deposited with SEBI.