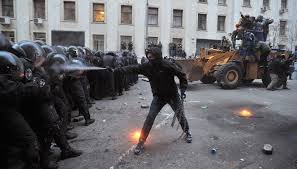 RUSSIA: Russia’s move to annex Ukrainian province Crimea has badly affected the credibility and international stature of Moscow, the White House said. “In general, Russia’s credibility and stature internationally is affected by these actions …,” White House Press Secretary Jay Carney told reporters yesterday.
“What we have seen of late by the actions taken by the Russians in Crimea is an undermining of and a violation of those principles that undergird that structure that supports all of these international institutions. So it certainly affects their standing within the world community,” he said.
Carney also warned Russia to be ready to face the consequences of annexing Crimea. “Sanctions will increase. Designations will be forthcoming. So it’s hard for me to put a pin on what the ongoing consequences of that kind of action would be,” he said. “What I can say without question is that this action, the results of the referendum, and the attempt to annex a region of Ukraine illegally will never be recognised by the United States or the international community,” he asserted.
Carney said further steps would be taken in response to Russia’s continued refusal to avail itself of the means to resolve this diplomatically in a dialogue with the Ukrainian government, with the participation of international interlocutors, through the presence of UN and OSCE monitors in Ukraine; through a process that is established under Ukrainian law and the constitution that would allow for the legal discussion of decisions, like changing the status of a region within the sovereign state of Ukraine.
“These are all options available to Russia, available to those in Crimea who have taken this step. Russia has not availed itself of those options, thus there will be further costs imposed not just by the United States but by others,” he said. The US has said all along that, and so has the Ukrainian government, that there are legal means by which the residents of Crimea could take steps to change their status within Ukraine or change their relationship with Ukraine or Russia, for that matter, Carney said. “But there’s a legal code in place and a constitution in place for those kinds of discussions to take place and decisions to be made,” he added.