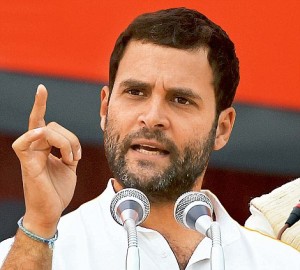 NEW DELHI : The Rashtriya Swayamsevak Sangh says it will sue Rahul Gandhi for his comments blaming it for Mahatma Gandhi’s assassination.The Congress vice president was criticizing the BJP at an election rally in Maharashtra, when he referred to the opposition party’s ideological mentor, the RSS.
“They killed Gandhi. RSS people shot Gandhi dead. And today their people (BJP) talk about Gandhi. Sardar Patel was a Congress leader, he has written clearly about RSS, and today they (BJP) tell Congress that Sardar Patel is our leader,” the 43-year-old said at the rally in Thane district, his last on a two-day tour of the state.
RSS spokesperson Ram Madhav today said, “We will take legal action against Rahul Gandhi for his irresponsible utterances linking RSS with Gandhi’s murder. We will also complain to the Election Commission.”
Mahatma Gandhi was shot dead on January 30, 1948, by Nathuram Godse, a Hindu activist. Sardar Patel, India’s first home minister, had then banned the RSS but revoked it within eight months, stating that the organisation had nothing to do with the killing.
Rahul Gandhi had last month said BJP’s prime ministerial candidate Narendra Modi believed in an organisation like the RSS, whose “poisonous mentality” killed Gandhi. At the time, the Sangh said it would not react to “kindergarten comments” and Rahul should read history closely.