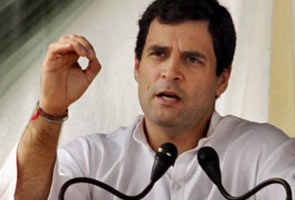 BARDOLI : Congress vice president Rahul Gandhi addressed a rally in Bardoli in Gujarat. Mr Gandhi is campaigning for the Lok Sabha elections that are due in a few months. Mr Gandhi launched a direct attack on Mr Modi in his own state. Mr Gandhi targeted Mr Modi on Sardar Patel’s statue that is due to come up in Gujarat, the RSS ideology and on corruption in Gujarat.
Here are the highlights: # The neta here talks about Sardar Patel, says he will make a statue, but they don’t read history.# They have no understanding of Sardar Patel’s ideologies but they say they want to make a statue.# Sardar Patel said that RSS is a poisonous entity.
The RSS ideology was behind Mahatma Gandhi’s murder.#Modi ji just wants to make a statue without any idea of his ideology#We live for the Congress party, for the poor. Corruption is in Gujarat. They do not see corruption in Gujarat.# Modi ji speaks whatever comes to his mind, even if it’s not true.
#Congress brought RTI to the entire nation.# Modi did not let lokyukta pass in Gujarat for nine years.# According to RTI Act, there should be 10 information commissioners in every state. Gujarat has just one, that too after a court order.# If BJP is really against corruption why not help Congress pass the 6 bills lying in in Parliament?# Who has fought for the farmers and their land? It is the Congress.# The Gujarat government is run by the rich. All the state government can do is promise to build statues# 13000 govt schools were shut down in Gujarat, but this is never mentioned anywhere.#
What is the use of development, if the poor and the adivasis are left out?#The Congress wants to put power in people’s hands, not in hands of select few.#We will give power to the poor.# There was a 55,000 crore package, did you benefit from it?# We talk about eliminating poverty, they talk about eliminating the poor. Indira Gandhi ji ne kaha tha ‘ghareebhi hatao’ yeh kehte hain ‘ghareeb ko hatao.’# The entire India does some work. Some make tea, some drive taxi’s, some are farmers. We need to respect everyone. But a person who makes a fool of us, they do not need to be respected. (Magar jo ullu banata hain uski izzat nahi karni)