Jaipur: crackers outside their offices. BJP has win 162 seats out of 199 seats. Congress has won 21 seats. BSP has won 3 seats. The National People’s party has won 4 seats. Other parties have a total of 9 seats. The BJP’s strong return in the State and the defeat of Congress was beyond the expectation of political observers and defied all political calculations. Vasundhara Raje, who failed five years ago on account of infighting in BJP, reinvented herself and galvanised the cadre to spearhead her party’s spectacular comeback to power in Rajasthan
.It was a landslide victory for Bharatiya Janata Party (BJP) in Rajasthan.

The party under Vasundhara Raje’s leadership won 162 seats where Congress managed to win 21 seats only. BJP gained 84 seats and Congress lost 75 seats in comparison to last assembly election which was held in 2008. BJP’s CM candidate Vasundhrara Raje thanked the people of Rajasthan. “We have learnt a lesson that the people are paramount,” the BJP leader said, while also highlighting the Narendra Modi factor in the 2013 state polls – billed as a semi-final to the 2014 national polls. We have learnt a lesson that the people are paramount, says Raje She had a clear message for the people of Rajasthan – that their belief in good governance will soon turn the dream of a new and developed Rajasthan into reality. On the contrary, outgoing CM Ashok Gehlot was engaged in a blame-game.

He claimed that Congress lost in the state assembly elections because “of national issues”. Speaking to reporters, Gehlot said, “BJP’s win in Rajasthan was on the basis of mere lies and rumours. If you speak lies over and over again, people will start believing it.” “On our part, we fought the elections on the issues of development, on our welfare schemes. Our health scheme is one, for which even the Gujarat government has shown active interest”, claimed Gehlot. Asked how the opinion poll projections have now been proved correct, Gehlot said, the issue is not opinion polls. “The people of Rajasthan were misled by lies and rumors.” 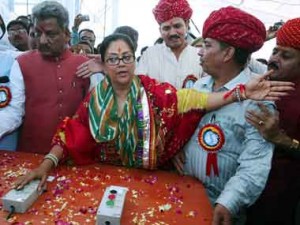