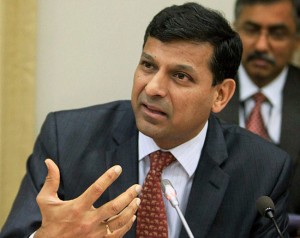 The Reserve Bank on Wednesday said it is not the right time to take back measures it adopted to control rising current account deficit, but favoured removing curbs on gold imports.

“At this point, it will be premature to withdraw these restrictions for a variety of reasons,” RBI Governor Raghuram Rajan told analysts on a conference call after announcing the mid quarter review of the monetary policy wherein he left all key rates unchanged. The RBI measures, the prime driver to narrow the current account deficit (CAD) to 1.8 per cent in the second quarter, will be withdrawn once the the deficit stabilises on its own, beyond the imposed gold restrictions, he said.
“Once we feel more comfortable with the current account deficit, once we have a sense that tapering, at least the threat of it, is behind us, we will certainly consider unwinding these distortionary actions,” Rajan said.

“I would be much happier if we had the kind of CAD we have without significant curbs on anything, including gold. We should aim to have a CAD without any distortions, removing the incentives for smuggling, that is what we will be working for,” he said earlier in the day.
CAD, which is the difference between the inflow and outflow of foreign currency, came down to 1.2 per cent in the September quarter, from 4.9 per cent in April-June period.
In the first half of this year, CAD stood at USD 26.9 billion (3.1 per cent of GDP), down from USD 37.9 billion (4.5 per cent of GDP) in the first six months of 2012-13.

The government and the RBI expect to contain CAD at USD 56 billion in 2013-14. In the previous fiscal, it had touched a record high of 4.8 per cent.
Ever since the release of official data pointing out to a reduction in CAD, there has been speculation that RBI and the Finance Ministry may withdraw the extraordinary steps, saying they were leading to smuggling of the precious metal.
The government had increased import duty on gold imports, considered a prime reason for soaring CAD, from 2 per cent in January 2011 to 10 per cent as of now.
The government had increased import duty on gold imports, considered a prime reason for soaring current account deficit.RBI had imposed the 80:20 rule for bank funding of gold imports meant for exports, under which an importer to get bank funds should export 80 per cent back after value additions.
“The gold restrictions are a distortion. And they are a necessary distortion at this point in time to restore balance in CAD. But going forward, we will not like this distortions to persist and we would like to remove it,” he said.
Gold imports accounted for USD 56.8 billion of the USD 88 billion CAD in FY 2013. According to experts, investors had to take to physical assets like gold and real estate due to the negative rate of returns in financial instruments. According to analysts, gold imports are set to decline by over 70 per cent this fiscal.
Minister of State for Finance Namo Narain Meena had said last week in Parliament that both the government and the RBI had taken a number of measures to contain CAD and boost capital flows.