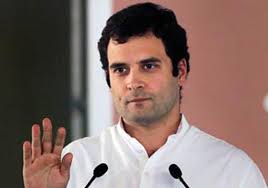 BARDOLI : Congress vice-president Rahul Gandhi will land in arch rival Narendra Modi’s home turf today to participate in Youth Congress’s Vikas Khoj Yatra (or March in Quest of Development) at the historic Bardoli region in south Gujarat.
Mr Gandhi will join the yatra at Bardoli at about 11 am and after taking part in the ‘padyatra’ or march, the 43-year-old leader is likely to address the gathering at about 1 pm.
The Bardoli Lok Sabha seat is dominated by tribals and represented by Congress leader and Union Minister of State Dr Tushar Chaudhary for the last three terms. The Vikas Khoj Yatra was kicked off at Satyagraha Ashram in Ahmedabad on January 18. It is scheduled to conclude tomorrow at Swaraj Ashram at Bardoli.
The 23-day yatra has passed through nine Lok Sabha seat areas in the state, four of them represented by Congress at present.