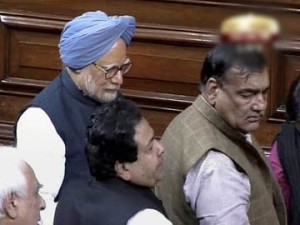 NEW DELHI : Telangana, India’s 29th state is a signature away. The Rajya Sabha this evening passed, amid complete chaos, the legislation that creates the new state by bifurcating Andhra Pradesh.The President will sign the bill to make it law and the new state will be notified.
Those for and against Telangana fought a pitched battle to the end. Two sessions of Parliament were washed out and unprecedented violence in the houses brought shame – there were scuffles, a lawmaker attacked colleagues with pepper spray, a mic was yanked, a computer hurled.
Earlier this week, the Lok Sabha passed the bill hurriedly amid a never-before TV blackout. The chief minister of Andhra Prdaesh Kiran Kumar Reddy resigned and quit the Congress.
And in the Rajya Sabha today, MPs tore paper and yelled “tear the bill, throw the bill,” crowding the well as Prime Minister Manmohan Singh announced a special package for Seemandhra, the regions that will form the residuary state once Telangana is carved out. The soft-spoken PM could barely be heard. The main opposition party, the BJP, supported the Telangana plan in both houses after several flip-flops and many threats. In the end, it was political expediency that won.
The Congress, which rules at the Centre, hopes to make a sweep of the Telangana region in the general elections due by May, by fulfilling the decades old aspiration of the region. It has tactically chosen the rout it now faces in Seemandhra, which wants a united Andhra Pradesh, fearing that the division will mean less water and other resources. It is expected to ally with K Chandrashekhar Rao or KCR of the TRS, seen as the face of the struggle for Telangana; the TRS chief will meet Congress president Sonia Gandhi tomorrow.
The BJP, never a big player in Andhra Prdaesh, has settled for making a small beginning in the Telangana region; it is counting on goodwill for the support it offered to the government to help pass the bill in both houses.
In the end, the party agreed not to press for any of the amendments it had sought in the bill. That agreement came about at a meeting held by the Prime Minister with senior BJP leaders earlier in the day.
Parties like the Trinamool Congress protested that the bill was passed illegally. The Left called it match-fixing between the Congress and the BJP.