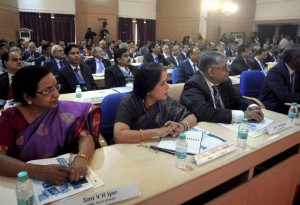 PUNE: Prime Minister Narendra Modi will on Saturday meet top bankers, insurers, financial sector regulators and Finance Ministry officials, who assembled here on Friday for a two-day “retreat” to discuss plans for revitalising the banking sector.
The PM will meet bankers today during the concluding session of the retreat, where an action plan for reforms in public sector banks (PSBs) will be prepared.The retreat started at 1.30 pm yesterday.
The second day would begin with regular sessions at 9 am with a talk by Swami Sukhbodhanandji on “Leadership and Change Management”.
“In view of the importance of the retreat being held January 2-3 at Pune for banks and financial insititutions with a view to injecting more money into the system, the Prime Minister will go to participate in the concluding session,” Finance Minister Arun Jaitley had announced last week.
Jaitley, along with Reserve Bank Governor Raghuram Rajan and heads of PSBs will be attending the retreat called “Gyan Sangam”.

“The final objective would be to prepare a blue print of reform action plan. The outline of the reform action plan would be presented to the Prime Minister on January 3 at the retreat. Then, further deliberations will take place on this in the presence of the Prime Minister,” the Finance Ministry said in a statement.
The government had decided last month to permit public sector banks to raise up to Rs 160,000 crore from capital markets by diluting government holding to 52 percent in phases so as to meet Basel III capital adequacy norms.
The government controls 22 of the 27 public sector banks through majority holding. In the remaining five banks, state-run State Bank of India holds majority stake.Presenting his maiden annual budget in July, Finance Minister Arun Jaitley said that the capital of state-run banks will be raised through sale of shares to the public.

Upwards of Rs 240,000 crore of capital by equity is required to be infused into India’s banking sector by 2018.The Basel III norms, which will come into effect March 31, 2019, were put in place following the 2007-08 financial crisis in the US.