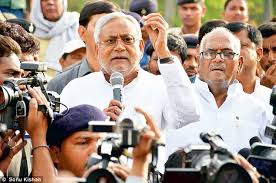 PATNA:   Nitish Kumar has led about 130 legislators from his party the Janata Dal United and allies Rashtriya Janata Dal and the Congress to the Bihar Governor’s house, to demonstrate that he has a majority in the assembly.
The JDU has asked the Bihar Governor to invite Nitish Kumar to be chief minister within 48 hours. It has expelled Jitan Ram Manjhi, who has refused to resign as Bihar chief minister, for anti-party activities. Mr Manjhi had met Prime Minister Narendra Modi yesterday.
The party has also booked 140 seats on a flight to Delhi tomorrow, where it has sought an appointment with President Pranab Mukherjee to demonstrate support for Mr Kumar.
“The Bihar crisis was scripted in Delhi. Operation Jitan Ram Manjhi has been engineered by (BJP chief) Amit Shah and it has PM Modi’s blessings. Yesterday, the tone that Manjhi had used after meeting the PM cannot be that of a minority chief minister,” said JDU leader KC Tyagi.
After his 40-minute meeting with PM Modi yesterday, Mr Manjhi had declared, “I am the Chief Minister and I will be here till the legislature party decides otherwise. On the floor (of the assembly), whoever gives us support we will take it.”
He said he asked for PM Modi’s “support” in Bihar but insisted that only development was discussed.
Over the weekend, the JDU sacked Mr Manjhi as its leader in the Bihar Assembly and elected Mr Kumar in his place. Elections will be held in the state later this year and the JDU wants Nitish Kumar to lead its campaign.
Mr Manjhi said he would step down if he failed to prove his majority but also taunted Nitish Kumar, who had handpicked him as his successor after quitting in May owning responsibility for his party’s poor performance in the national election.
“If Nitish Kumar has numbers, why is he unduly worried?” he said.
The JDU has 111 legislators in the 243-seat Bihar assembly. Mr Manjhi reportedly has the support of a dozen MLAs, while the party says a majority of the lawmakers supports Nitish Kumar.
A party needs 122 MLAs for a majority. Lalu Yadav RJD has 24 and the Congress five MLAs.