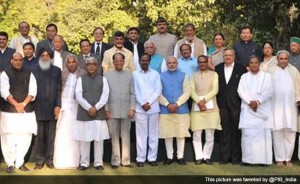 NEW DELHI : At a unique conclave of Chief Ministers called by Prime Minister Narendra Modi to replace the Planning Commission here Sunday saw a consensus that more power and planning should be devolved to states, but Congress strongly opposed dismantling of the existing 65-year-old body established by Jawaharlal Nehru.
PM Modi met all chief ministers today to arrive at a consensus on the name, structure and mandate of the new body. The Prime Minister envisages it as a knowledge and innovation hub with himself at its head. The Chief Ministers will be part of decision-making and implementation of plans
.The Commission could be called Niti Ayog and could be put in place by the end of January. It could be a combination of three-four divisions – like the inter-state council, the planning division, the evaluation division, the Unique Identification Authority of India and the Direct Benefit Transfer department.
The push to give more power to states comes directly from the Prime Minister, Mr Jaitley said. “It is impossible for the nation to develop unless states develop. There is a need to decentralize power and planning,” Mr Jaitley quoted the Prime Minister as saying.
“The central government will take a consultative view after today’s meeting. Most people (chief ministers attending the meet) were in favor of a structure in which states are also represented,” Mr Jaitley said.In his speech on the Independence Day, PM Modi had indicated that the 64-year-old Commission had run its course. In his opening remarks, the Prime Minister said his predecessor Manmohan Singh had stressed on the need for a relook at the Planning Commission towards the end of his tenure.Assam Chief Minister Tarun Gogoi – one of those supporting restructuring instead of scrapping the Planning Commission – however said Manmohan Singh favoured restructuring, not replacement.”
The Planning Commission has performed a great service in post-Independence era and India has become an economic  powerhouse,” Mr Gogoi said.The Congress has heavily criticised the plan, calling it “shortsighted and dangerous”. Its chief ministers, including Mr Gogoi, are not in favour of scrapping the panel.
“It will also have long term adverse impact on centre-state relations,” said party spokesperson Anand Sharma.Uttar Pradesh Chief Minister Akhilesh Yadav and Odisha Chief Minister Naveen Patnaik said the Planning Commission used to create “one size fits all” kind of solutions and plans  and emphasized on the need for an entity which would create state specific plans and funding.Besides the Prime Minister and the Chief Ministers, the meeting was attended by Finance Minister Arun Jaitley and Home Minister Rajnath Singh.
West Bengal Chief Minister Mamata Banerjee and her Jammu and Kashmir counterpart Omar Abdullah skipped the meet.