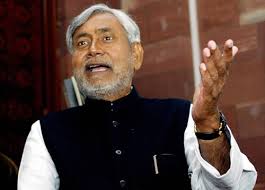 NEW DELHI : JD(U) leader and Bihar Chief Minister Nitish Kumar on Monday said that parties which do not have any representation in the Parliament but are a force to reckon with, could also be a member of the bloc.“Parties which does not exist in Parliament but have strength outside Parliament can be members of the bloc,” Kumar told reporters on his arrival from Delhi.
The JD(U) leader met top leaders like former Prime Minister HD Deve Gowda, CPI(M) general secretary Prakash Karat, CPI leader AB Bardhan and Forward Block general secretary Debabrata Biswas in Delhi to take the matter forward.
Incidentally, Kumar had missed the meeting of the 11 parties held in the capital last week over the possible alternative front. About the grouping’s future plans for the forthcoming Lok Sabha elections, Kumar said the parties were yet to decide on the Prime Ministerial candidate and at the moment the front was working on a “comprehensive and solid agreement” over federalism and secularism as the basis of its constitution.
He exuded confidence that the proposed front would be the biggest coalition as people have lost their hopes on both Congress and the BJP.  The Left Front was the prime initiator of the efforts for the formation of an alternative front and JD(U) was actively supporting the move, he stressed.
On Leader of Opposition in Rajya Sabha, Arun Jaitley’s remarks that the JD(U) would be a loser in breaking up from NDA, Kumar said that “the gainer and the loser” would be known only after the general elections.
Nitish took an apparent dig at Narendra Modi for remarks of a Gujarat minister linking migration from Bihar and Uttar Pradesh to surge in the number of poor in the state over the last decade.
“For this they are blaming people from Bihar and Uttar Pradesh going there… Like Maharashtra, voices against people of Bihar have started in Gujarat also,” he criticised.