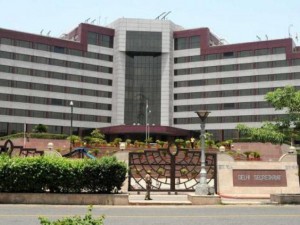 NEW DELHI: Some 200 officials in Delhi are on mass leave today to protest against the suspension of two colleagues, allegedly for refusing to sign off on decisions taken by the Aam Aadmi Party (AAP) government. The Centre has rejected the suspension, setting up a new clash with Arvind Kejriwal and his party.
The Centre has declared the officers’ suspension “null and void” under new rules that require the Prime Minister’s sanction for such action.
The mass leave by officers hit a trial run today of the odd-even rule that will be in force in Delhi tomorrow. Nearly 40 officers did not report for the pilot.
AAP has accused the BJP of instigating the officers. “The BJP is tweeting and manipulating officers, is this not a conspiracy against the Delhi government?” said Delhi minister Satyendra Jain.
The officers are protesting against the suspension of Yashpal Garg and Subhash Chandra, both special secretaries. Sources say they had refused to sign off on pay hike decisions taken by the AAP cabinet and insisted that they must be cleared by the Lieutenant-Governor, who represents the Centre in Delhi.
Officers say that only the Lieutenant Governor had the right to take action against these officials – who are of the Delhi Andaman and Nicobar Civil Service (DANICS) cadre – a stand that the Centre has backed.
Around 70 Indian Administrative Service or IAS officers, who work in different departments of the national capital, have also threatened to work half-day.
The mass leave could impact the preps for the odd-even scheme in Delhi, which comes into force tomorrow; most of these officers are looking after projects related to the road-rationing plan.
Earlier, the AAP government had suspended five officials for alleged wrongdoings.
“The Delhi government does not have the power to suspend these officers…it can only recommend their suspension and the Lt Governor can act with permission from the home ministry,” said an official.Since AAP was voted to office in Delhi in February, it has been locked in a constant power struggle with the Centre.