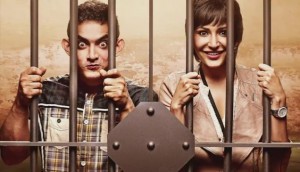 NEW DELHI : The Delhi High Court on Wednesday issued notice to the producers and directors of Aamir Khan-starrer PK on a novelist’s plea accusing the makers of the movie of plagiarising certain portions from his Hindi book Farishta published in 2013.
Justice Najmi Waziri asked Vidhu Vinod Chopra and Raj Kumar Hirani, who directed the film, their respective production companies and scriptwriter Abhijat Joshi to appear before joint registrar of the High Court on April 16 for recording of evidence in this regard.
“Notice issued. Let them (film makers) say what they have to say in regard to the allegation before joint registrar,” the judge said.The court’s notice came on a plea by Kapil Isapuri alleging that Chopra and Hirani, producers and directors of the film, their production companies and scriptwriter Joshi have “stolen the characters, expression of ideas, scenes (sequences) from the novel“.
He sought punitive damages of Rs one crore from the makers along with credit for his work.
In his plea filed through advocate Jyotika Kalra, Isapuri claimed that in his novel he “has criticised blind following of so-called godmen” as well as that “profession of religion is not natural but is man—made and artificial” and “in a group of people nobody can identify their respective religion“.
He also claimed that various other issues raised by the movie have been “copied” from his book.“That the novel has many more such situations which have been very cleverly copied by the defendants in the film by making minor changes and insignificant variations,” the petition claimed.
PK, starring Aamir Khan, Anushka Sharma, Sanjay Dutt and Sushant Singh Rajput in pivotal roles, is a satire on godmen. It narrates the story of an alien (Aamir) who comes to Earth on a research mission and befriends a television journalist Jagat (Anushka) and questions religious dogmas and superstitions.