NEW DELHI : Prime Minister Narendra Modi and Peoples Democratic Party patron Mufti Mohammad Sayeed met here on Friday and sealed the alliance between the Bharatiya Janata Party and the PDP to form a coalition government in Jammu and Kashmir. 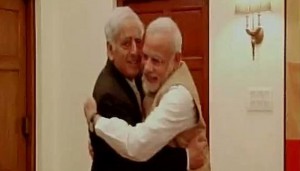 The meeting was held at 7 Race Course, the official residence of the prime minister.According to highly-placed sources, Sayeed will be heading a 25-member cabinet which will have 12 BJP MLAs including a Deputy Chief Minister post. This is the first time that BJP is in the government in the state.
Briefing the media after the meeting, Sayeed said, “I had a fruitful meeting with PM Modi and discussed many issues.”“Both BJP and PDP have reached a common ground and have developed consensus on a common minimum program (CMP),” Sayeed said.
“BJP and PDP got majority in Jammu and Kashmir areas respectively. Then we thought we should respect people’s mandate and contemplated on giving a stable government to the electorate,” the PDP patron said.
Mufti maintained that both the BJP and PDP had held hectic parleys over the past two months and arrived at consensus over the CMP.He termed the BJP-PDP alliance as coming together of ‘North Pole and South Pole’.
Sayeed refused to comment on the Cabinet berth sharing in the government saying everybody will get to know on the swearing-in ceremony day, which is scheduled for March 01 (Sunday).“PM Modi will attend the oath-taking ceremony,” Sayeed confirmed.
Sayeed asserted the historic coalition is a political alliance first, and then an alliance for governance.
“The PM has the mandate of people of the nation today; it is an opportunity for both of us to solve the problems of J&K,” Sayeed asserted.Sayeed, who will be returning to power after a gap of more than nine years, backed Modi’s slogan, saying, “I also want Sab ka saath, sab ka vikas (development for all).” He was the Chief Minister of the state from November, 2002 to 2005.
He also laid emphasis on engaging Pakistan in maintaining peace in the Valley and hoped Modi will carry forward the legacy of former prime minister Atal Bihari Vajpayee.
“I told PM that I have a dream of making J&K an island of peace and for that we need to engage Pakistan,” Sayeed said.The Modi-Sayyed meeting came after hectic parleys between BJP and PDP leaders, which went on for weeks to reach consensus on sensitive issues like the AFSPA, rehabilitation of Kashmiri Pandits and Article 370.
Sayeed will be sworn-in as Chief Minister at 11 am on Sunday.Highly-placed sources said a document has been prepared by the two sides focussing on development and providing job opportunities to youths. According to a News Agency The document also lists ways and means for rehabilitation of nearly 60,000 Kashmiri Pandit families who had left the Kashmir Valley after the onset of militancy in early 1990s.
On Article 370, while BJP has given no written assurance as demanded by PDP, the document is expected to say that both parties will respect the aspirations of the people of the state within the Constitution, the sources indicated.

The proposed document may also touch upon the issue of more than 25,000 families of West Pakistani refugees by terming it a humanitarian issue. The other issues include handing over of hydel projects to the state government and vacating of land and buildings by the Army in the Valley.
On Tuesday, presidents of both the parties, Mehbooba Mufti of PDP and Amit Shah of BJP, had met after which they announced the formation of a coalition government in the state.
The December 23 election results saw a highly-fractured mandate with PDP emerging as the single largest party with 28 MLAs followed by BJP with 25. Erstwhile allies National Conference and Congress ended with 15 and 12 seats respectively.