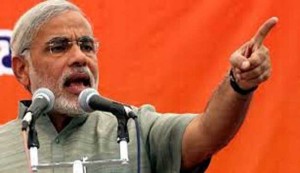 PASIGHAT: (Arunachal Pradesh) Bharatiya Janata Party’s prime ministerial candidate Narendra Modi on Saturday attacked China’s stand on Arunachal Pradesh saying that people of the northeastern state have always stood firm against China and no power in the world can snatch away the territory.
After Assam and Manipur, the Gujarat chief minister was addressing a rally in Arunachal Pradesh’s Pasighat. ”Every person in Arunchal Pradesh is a soldier who has fought to keep the Chinese away from our land,” Modi said.
“People of this land did not come under pressure from China. The clarion call of ‘Jai Hind’ reverberates in this land.”India and China have fought a brief border war in 1962 differences on the border. China lays claim to more than 90,000 sq km disputed by New Delhi in the eastern sector of the Himalayas, while India says China occupies 38,000 square km of its territory on the Aksai Chin plateau in the west.
China has of late grown increasingly assertive and questioned India’s claims over the territory, calling it instead South Tibet.He again raked the death of Nido Tania, son of an Arunachal Pradesh MLA, who died in January after being allegedly beaten up by some shopkeepers in Lajpat Nagar area of south Delhi when he retaliated after they made fun of his hairstyle.“I pray to the almighty to bless Nido Tania’s family. The blood in your veins is the same blood that flows in my veins,” he said.
Modi lashed at lack of development in the state saying that he will carry forward the good work that former prime minister Atal Behari Vajpayee and the NDA government started.“What kind of a government is it that does not listen to their own CM? Do you expect them to listen to you?” he asked.“You need a government in Delhi that is sensitive to problems in every part of this state and a government that listens to you.”Modi is looking for a foothold in the region whose party does not boast of any influence in the eight states.
The Christian-majority population in some hill states, the status of the Congress as the only “national party brand”, more trust in regional parties and perception of the BJP as being “too Hindi belt” are the major factors behind its dismal presence in the region.Modi’s elevation as his party’s prime ministerial nominee has coincided with a slide in the BJP’s fortunes in the northeast, which offers 25 MPs.The BJP’s hope of expanding its base or even repeating its 2003 showing hinges on the kind of impact Modi will have on the region’s electorate. The visit prior to the Lok Sabha polls is also expected to test his acceptability as a leader beyond the Hindi heartland.