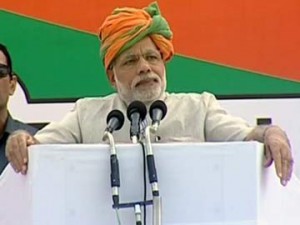 HISAR (Haryana) :  Prime Minister Narendra Modi today invoked the Congress party’s biggest icons Jawaharlal Nehru and Indira Gandhi as he campaigned in Haryana, at the same time taking digs at the party for corruption and dynastic rule.
“Jawaharlal Nehru was the first Prime Minister, Chacha Nehru for children, and I request that on his birth anniversary 14 November, children of all schools be given lessons in cleanliness and hygiene,” PM Modi said at a rally in Hisar to campaign for the October 15 polls.
“Those who want to pay tribute to Chacha Nehru, should sit with the children loved so much by him and tell them how to lead a healthier life.”Mr Modi said the cleanliness campaign should be launched between 14 and 19 November, the birth anniversary of former prime minister Indira Gandhi.
“Every school, every anganwadi should participate in this cleanliness campaign in those five days,” he said, adding, “We are not in the politics of untouchability.”Mr Modi’s references to top Congress leaders comes as the party has accused him of trying to appropriate the legacy of Mahatma Gandhi with his nationwide cleanliness campaign.
In Maharashtra, the PM responded to these allegations by saying, “I wouldn’t dare snatch away Gandhiji from anyone. It is they who have deserted Gandhiji (the Mahatma’s principles).”