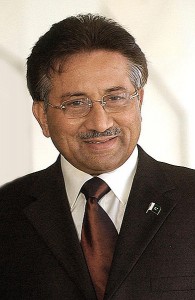 Islamabad :Former Pakistani dictator Pervez Musharraf has sought “forgiveness” for any wrongs he may have committed during his nine-year regime, saying he will face all cases against him and not flee the country like a coward.
“Whatever I did, I did it for the country. It could be wrong but there was no bad intention in it. Even then, if someone thinks that I have committed a mistake, I seek forgiveness,” Musharraf said in an interview to ARY News, his first since he was placed under house arrest at his palatial farmhouse on the outskirts of the capital eight months ago
As insisted by his close associates earlier, Musharraf said he will not leave the country to run away from the numerous cases registered against him including a high treason case. “I don’t want to run away cowardly and will face all the trials to makes the thing clear,” the former President said. “Let there be 100 trials,” he said in the interview aired Thursday night.
Musharraf has been granted bail in all four cases against him, including one over the assassination of former premier Benazir Bhutto, but is now facing trial in a special court on the charge of high treason for imposing emergency in 2007.This is the first time in Pakistan’s history that a former military dictator is facing trial for treason. If convicted, Musharraf could face either life imprisonment or the death penalty With a shawl around his shoulder, kurta-clad Musharraf sounded emotional at times and termed revival of the economy and tackling extremism and terrorism as most serious challenges the country is facing.
Asked about the negotiations with the Taliban and other militant groups, he said he supported it but “talks should be held from a position of strength”. Musharraf however added that the Taliban and others were “our own people” who had gone astray. Musharraf said 90 per cent officials of the time advised him not to liberate the media. “Frankly I shall want to take the credit of making the media free here,” he said.
Speaking about terrorism, Musharraf alleged there was always a foreign hand behind such acts including unrest in Balochistan and sectarianism.PTI.